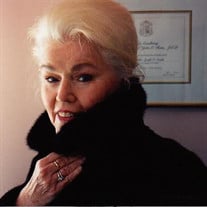 KATHARINE JOSEPHINE (MACFARLAND) CUSACK , 96, Cape May, former resident of Shrewsbury, N.J. died peacefully April 7, 2017 at Victoria Manor. Happily married for 70 years to the late Joseph Edwin Cusack. Born in 1921 and raised in the Philadelphia area, and lived in South Jersey and Central Jersey. Graduated from Raven Hill Academy, Philadelphia, PA, Merion Mercy (formerly Mater Misericordiae) Academy, Merion, PA and attended Chestnut Hill College, Chestnut Hill, PA. She was a strong woman of many interests and talents. A real estate sales associate, historical docent, elementary school teacher, and a small business owner. In her later years she was Vice President of the Little Silver Garden Club where she developed many friendships. Her other passion that she shared with her husband was her appreciation of travel. International or domestic they loved it all. But her great love for her children Ed (Beth), Kathie (Bill), Mary (Ken), John (Ellen) and Lizzie (Larry) is why she will be forever alive. She was blessed with 16 grandchildren – Sean (Carrie), Maureen (Davin), Stephanie (Joe), Courtney (Brian), Katie (Jason) Jenny (Britt), Melissa, Meghan (Tim), Derek (Maggie), Emily (Andrew) Annie, Joe (Kristin) Robert, Patrick, John Jr, and Lindsey - who have given her 25 great grandchildren and counting – Aidan, Connor, Ryan, Audrey, Libby, Anna, Carson, Kaitlin, Jacob, Jonathan, Jackson, Ashleigh, Addison, Marley, Chance, Frazier, Agnes, Isabella, Fiona, Beatrix, Brianna, Timmy, Orsen, Johnny, Maisie. She will miss her two sisters (in-laws) deeply, Maureen & Sis, who were dear to her throughout 7 decades and beyond, and her nieces and nephews who enriched her life. She is predeceased by her adored husband Ed – her dear son John, her beloved sister Betty, her wonderful brothers-in-law Kevin & Stacey. Mass of Christian Burial will be celebrated on Tuesday (Apr. 11th) at 9:30am in Our Lady Star of the Sea Church, 525 Washington St., Cape May where there will be a viewing from 8:30am to 9:20am. Interment will be on Wednesday (Apr. 12th) at 11am in Holy Cross Cem., Yeadon, PA. In lieu of flowers donations may be sent in her honor for a garden memorial to Office of Advancement, Merion Mercy Academy, 511 Montgomery Avenue, Merion Station PA 19066. Please designate your donation to The Memorial Garden Bench in Memory of Katharine MacFarland Cusack, Class of 1938.

The family of Katharine J. Cusack created this Life Tributes page to make it easy to share your memories.