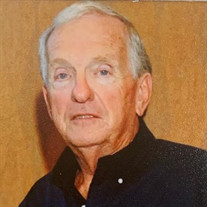 RIPPMAN, Joseph A. – 85, of Cape May, passed away peacefully on Wednesday, September 23, 2020. Joe was a graduate of North Catholic H.S. Class of 1952 and a graduate of Drexel University where he obtained a Bachelor of Science degree in Aeronautical Engineering. He honorably served in the United States Coast Guard. Joe worked for the United States Government, Naval Air Systems Command, Lakehurst, NJ for 40 years where he retired as an Aeronautical Engineer. He was a member and usher of Our Lady Star of the Sea Church, Cape May and was a Past Grand Knight of The Knights of Columbus, St. Mary’s Council, Cape May. Joe was a kind and gentle man that loved his children and his grandchildren. He was known and will be remembered as “Pop-Pop” by many children at the beach. He enjoyed organizing Knights of Columbus events and relaxing on Cape Mays’ sandy beaches. He was an avid swimmer as well as a long-time little league baseball coach. He is predeceased by his brothers, Albert Rippman and James Rippman. Joe is dearly missed and forever loved by his family which includes his wife of 62 years, Constance; four children, Joseph (and Michele) Rippman, David (and Roseanne) Rippman, Thomas (and Deborah) Rippman and Constance (and Michael) Mahon; five grandchildren, Nicolaus, Taylor, Jenna, Alexander and Jessica; sister-in-law, Elaine Rippman. Joe’s viewing will take place on Monday (Sept. 28th) from 8am until 9am in the Spilker Funeral Home, 815 Washington St., Cape May. Mass of Christian Burial will follow at Our Lady Star of the Sea RC Church, 525 Washington St. beginning at 9:30am. Interment will be in Gate of Heaven Cem., Berlin. In lieu of flowers, memorial contributions suggested to Holy Redeemer Hospice, 1801 North US Rt 9, Swainton, NJ 08210. Info and condolences: spilkerfuneralhome.com

RIPPMAN, Joseph A. &#8211; 85, of Cape May, passed away peacefully on Wednesday, September 23, 2020. Joe was a graduate of North Catholic H.S. Class of 1952 and a graduate of Drexel University where he obtained a Bachelor of Science degree... View Obituary & Service Information

The family of Joseph A. Rippman created this Life Tributes page to make it easy to share your memories.