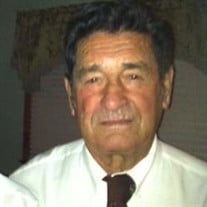 TROLLI, Joseph A., Jr. “Josie” – 85, of West Cape May passed away peacefully and suddenly at his home on Sunday, May 17, 2015. Born in West Cape May, Josie was a lifelong resident of the area. In his younger years, he was a member of the Cape May Beach Patrol; played semi-pro football for the Cape May Rockets and owned Josie’s Steak Shop on Sunset Blvd., West Cape May (later moved to Elmira St.). A hard worker, Josie owned his own masonry business and was proud to work with his brother, John, for so many years, side by side serving the Cape May area. He was a member of the Cape Island Deer Club; Sunset Beach Sportsmen’s Club, Cape May Point; Cape May VFW and the NJ Archery Association. He was an avid hunter and outdoorsman. Above all things in life, Josie is remembered by his family for being a devoted husband; loving father, grandfather and great grandfather; and a terrific brother. He is predeceased by his wife, Betty and his daughter, Rita Mae Reagan. Josie is dearly missed by his loving family which includes his brother, John Trolli; four daughters, Diana (and Stephen) Coles, Valerie Sperlak (and Ray Salden), Christine (and Ken) Conner and Bonnie (and Bill) Feraco; ten grandchildren; eleven great grandchildren and “one in the oven;” also his dear companion, Joan Karisson. Relatives and friends will be received on Thursday (May 21st) from 11am -12pm in the Spilker Funeral Home, 815 Washington St., Cape May with Josie’s memorial service beginning at 12:00. Interment will be private and at later date. In lieu of flowers, memorial contributions are suggested to: Cape May Beach Patrol Benevolent Assoc. Scholarship (Clete Cannone), PO Box 372, Cape May, NJ 08204, or VFW Post 386, 419 Congress Avenue, Cape May, NJ 08204 Info and condolences: spilkerfuneralhome.com - Even though this website offers options of sending flowers, please do NOT send flowers to the family. Please observe the request to send a memorial contribution to: Cape May Beach Patrol Benevolent Assoc. Scholarship (address above).

The family of Joseph "Josie" Trolli created this Life Tributes page to make it easy to share your memories.

Send flowers to the Trolli family.