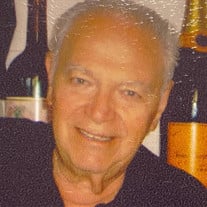 Joseph Anthony Cataldo - 93, of Cape May and formerly of Delray Beach, FL; Saugerties, NY; Pelham, NY; and New York City, NY, passed away peacefully on December 15, 2019. Joe was born on May 7, 1926 to Gaetano and Maria (Vinci) Cataldo in New York City. He graduated from high school in 1944 and entered the Army at the height of World War II. He served as a paratrooper, entering France and participated in the initial invasion and occupation of Germany. He was awarded the Bronze Star and Combat Infantryman’s Badge. One of his proudest moments later in life was to be awarded the French Legion of Honor by the French Government in 2014. Professionally, he was a cement mason after the war, then using his GI Bill benefits, spent 25 years as a building safety inspector for the city of New Rochelle in New York. Joe’s life passions were enjoying time with his extended family and friends, being outdoors hunting or fishing, and demonstrating his artistry through wood carving. Mostly, he just loved to be kind and helpful to others. Joe married in February 1950, and was a devoted husband to Antoinette (2009) for close to 60 years. Together they loved to travel from Pelham with friends to the Jersey Shore back in the 1950s and 60s, then farther afield to Florida, Canada, California, and eventually individual trips to Germany, Switzerland, Italy, Great Britain, Austria, and The Netherlands. When Joe retired in 1988, they settled together in Florida among many friends who also migrated from colder climates. In 2015, Joe finally settled in Cape May to be near his family, living in Victorian Tower, and eventually Victoria Commons in North Cape May. He is survived by his son Gaetano (Tom) Cataldo and his wife Ioanna Iliopulos, his granddaughter Arianna Cataldo, his sister Maddalena (Millie). He is preceded in death by his wife Antionette (Spera) and son Joseph. Services will be held at Gate of Heaven Cemetery in Hawthorne, New York.

Joseph Anthony Cataldo - 93, of Cape May and formerly of Delray Beach, FL; Saugerties, NY; Pelham, NY; and New York City, NY, passed away peacefully on December 15, 2019. Joe was born on May 7, 1926 to Gaetano and Maria (Vinci) Cataldo in New... View Obituary & Service Information

The family of Joseph Cataldo created this Life Tributes page to make it easy to share your memories.

Joseph Anthony Cataldo - 93, of Cape May and formerly of Delray...