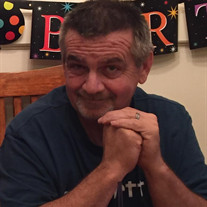 ROTH SR., Jon M. – 57, of West Cape May, passed away peacefully at his home on Monday, May 13, 2019. Jon was a lifelong resident of West Cape May and a graduate of Lower Cape May Regional High School - Class of 1980. Jon worked in the commercial fishing industry in his younger years and more recently as a Real Estate Broker. He enjoyed fishing off the rockpile or under the bridge and was ready for striper season. He was known by those close to him to have a sweet tooth which he developed from working in his father’s candy store as a boy. As a young man, skateboarding and surfing were some of his loves. He is predeceased by his parents, George and Margaret Roth and his brother, Joseph Roth. Jon is dearly missed and forever loved by his family which includes his wife, Darcy Dickenson; sons, Jon M. Roth, Jr. and Jerami M. Roth; stepson, Andrew Dickenson; siblings, George (and Helen) Roth, Robert Roth, Donald Roth, Patricia (and Joe) Volpe, Margaret (and Steve) Megonigal, Jerry (and Helen ) Roth, Tom (and Anita) Roth and Carl Roth; mother of his two sons, Joni Roth, as well as, over thirty nieces and nephews. Relatives and friends will be received on Monday (May 20th) from 1:30pm until 2:30pm in the Spilker Funeral Home, 815 Washington St., Cape May where Jon’s memorial ceremony, in the form of family and friends sharing thoughts, memories, prayers and love, will follow and begin at 2:30pm (please dress casually). In lieu of flowers, memorial contributions are suggested to the Cape May County Animal Shelter and Adoption Center, DN 501B, 110 Shelter Rd., Cape May Court House, NJ 08210 or online at: https://capemaycountynj.gov/173/Donate Info and condolences: spilkerfuneralhome.com

The family of Jon M. Roth Sr. created this Life Tributes page to make it easy to share your memories.