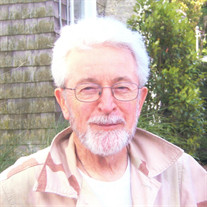 Dr. John V. McIntyre, Sr. died peacefully on January 5, 2018 at the age of 89. Formerly of Philadelphia, he lived in several New Jersey towns before settling in Cape May over 35 years ago. John was driven by passion in all that he accomplished and throughout his life, he led by example. John attended LaSalle College. While there, he was a coxswain for the Vesper Boat Club. His team represented the United States in the 1948 Olympic games. His degree from LaSalle led to a career in education, where he dedicated his life to improving the conditions and environment of the students he served. He advanced his career by earning subsequent degrees, enabling him to serve as Supervisor, Principal and Superintendent of Schools. After attaining his PhD in Child Psychology he became the Director of the Child Study Team in Lower Township Public Schools until his retirement. John was also retired from the US Army, where he attained the rank of Captain. The skills he learned there as a Ham Radio operator were later put to use by the City of Cape May as part of the Emergency Response Team. John’s many hobbies included competitive Black Powder shooting and fishing. He was a lifelong camper, gardener, golfer and above all, a gentleman. He shared his many talents with his children, grandchildren and great-grandchildren. John’s quick wit made him a natural storyteller, and he delighted those privileged enough to find themselves in his audience. He loved a good joke, even at his own expense. John believed that our roles on earth are to care for each other. In that light, he served in many volunteer roles within the community. He was an active member of Church of the Advent Episcopal Church where he served as the Warden of the Vestry, a lector and an usher. He volunteered his professional services to students from underprivileged neighborhoods and assisted organizations to provide educational services to their clients. John will be missed by his loving wife of 36 years, Sue (Kahlan) McIntyre. Joining in her grief are his children, grandchildren, great-grandchildren and extended family. Also feeling a great loss are his many friends, who he considered family. Funeral services will be held on Wednesday (Jan. 10th) at 11am in the Episcopal Church of the Advent, corner of Washington & Franklin Sts., Cape May where friends will be received from 10am until 10:50am. Interment is private and at a later date. In lieu of flowers, the family is asking that donations be made to St. Jude’s Children’s Hospital through “In Memory Of” on line at www.inmemoryof-memorial.org/john-v-mcintyre or if you prefer regular mail, mail to: In Memory Of, PO Box 5472, Charlottesville, VA 22905.

Dr. John V. McIntyre, Sr. died peacefully on January 5, 2018 at the age of 89. Formerly of Philadelphia, he lived in several New Jersey towns before settling in Cape May over 35 years ago. John was driven by passion in all that he accomplished... View Obituary & Service Information

The family of John McIntyre created this Life Tributes page to make it easy to share your memories.