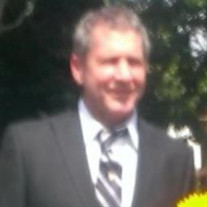 ALBERT SR., John M. – 62, of North Cape May, passed away unexpectedly on April 25, 2022. A lifelong resident of the Cape May area, John grew up in a commercial fishing family with over 100 years of experience collectively in the Atlantic Surf Clam Industry. He has captained over 20 boats and most recently has been the captain for the F/V Mary M. The old salty dog has clammed in the ocean off of the Jersey Coast for over 40 years, many of which were with his brothers and sons. His fishing abilities and selfless leadership were apparent not merely by the amount of clams he caught, but also the respect he received by his fellow fishermen. Anyone who was lucky enough to be his crewmate was always instilled with confidence and high morale knowing that they were always in good hands and at ease of any safety concerns. Although he had the rugged exterior as a man's man who has done manual labor and battled the seas his entire life, he was also the proverbial family man. Beloved husband to Janet, they shared many years of love, traveling, and raising their family. John devoted all of his time to his loved ones, especially his grandchildren. He loved being a PopPop and they all had their own special bond with him. Always the home chef, he took pride in cooking for his family even after getting home from his time at sea. His infectious good nature was not only reserved for humans as he made sure his house was always filled with multiple pets who returned this affection and often slept with him whether it be in bed or on his spot on the couch. His love for his family was endless. His natural way of improving the mood and the lives around him is a testament to his exceptional character. Always a man of God, he practiced what he preached and was always the example everyone around him tried to exemplify. He will leave an everlasting positive impression on anyone lucky enough to have been in the presence of his wisdom and effortless sense of humor. Laughing while still learning with him was commonplace whether at work or home. He is predeceased by his mother, Patricia; his father, Frank Albert Jr. (commercial fisherman lost at sea) and brother, Frank Albert III (commercial fisherman lost at sea). John is dearly missed and forever loved by his family which includes his wife, Janet; his children, Christa (Tom) Rucci, John Albert Jr., Michael Albert and Frank IV (Sammi) Albert; grandchildren, Tommy, Anthony, Gianna and Baby Frank V as well as his 5 siblings, Sharon, Karl, Tim, Eric and Louise. Funeral services are being held privately. In lieu of flowers, memorial contributions are suggested to any charities that help not only to preserve, but also improve the quality of life for the ocean, the commercial fishing industry, and the fisherman's memorial. (Spilker Funeral Home, Cape May) info and condolences: spilkerfuneralhome.com

ALBERT SR., John M. &#8211; 62, of North Cape May, passed away unexpectedly on April 25, 2022. A lifelong resident of the Cape May area, John grew up in a commercial fishing family with over 100 years of experience collectively in the Atlantic... View Obituary & Service Information

The family of John Albert Sr. created this Life Tributes page to make it easy to share your memories.