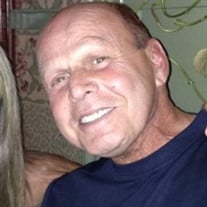 CICERO, Joseph J. “Joe” – 69, of Cape May passed away on Sunday, June 22, 2014 with his daughters and his son-in-law by his side. For 35 years, Joe was the owner of the Polar Bear Refrigeration and Air Conditioning Company. He founded the business in Pennsylvania in 1979. In 2002 he relocated to Cape May and started Polar Bear Mechanical. He ran the business out of his garage and used his kitchen table as an office desk. Within a short time, he developed long lasting relationships not only with his employees and customers, but the community as well. From then on he was known as “THE BEAR WHO CARES”. Joe was an active member of the Cape Classics Motorcycle Club in Wildwood; the Union League; Sons of Italy, Bayshore Sportsman Club and the Sunset Beach Sportsman Club. He was also an active contributor to many local charities. One of Joe’s favorite past times was riding his motorcycle on a sunny Saturday or Sunday afternoon. He also enjoyed cooking and hosting parties for his friends and loved ones. His most favorite past time was his family. Whether it was riding the quads with his grandchildren, or visiting his daughters at every job they ever had, family was his life. Joe will be long remembered and forever loved for being hard working, family oriented, and full of energy and life. Most of all, he will be remembered for being a devoted and loving father, grandfather and friend. He is predeceased by his sister, Mary Jean. Joe will be dearly missed by his loving family which includes his three daughters, Noreen Cicero of Cape May, Michelle (and Doug) Higgins of Dallas, PA and Maria (and Chris) Peterson of NYC, NY; one sister, Josephine Cooke of Gainesville, VA; three grandchildren, Benjamin Joseph, Katie and Kyler Higgins. Joe's funeral service will take place on Saturday (June 28th) at 2PM in the First Assembly of God Church, 1068 Seashore Rd., Cape May where there will be a viewing from 11AM - 1:50PM. Interment will take place privately and at a later date. In lieu of flowers, memorial contributions are suggested to the Brendan Borek High Tides Fund, PO Box 41, Avalon, NJ 08202 or online at brendansfund.org (supporting pediatric cancer).

The family of Joe Cicero created this Life Tributes page to make it easy to share your memories.

Send flowers to the Cicero family.