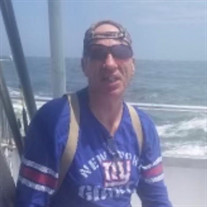 Joseph Bender (December 8, 1967 – October 25, 2021) Joseph Bender passed away peacefully in his home on October 25, 2021, surrounded by family and friends. Joe was born in Valley Stream, New York on December 8, 1967 to Raymond and Ena Bender. He attended LaSalle Military Academy. He later moved to Amityville, New York where he lived with his Uncle Bob and Aunt Mary. Joe is survived by his brother, Ray (Mary); sister, Rosie (Daniel); his nieces, Samantha (Christian) and Sharon; and his nephews, Daniel (Nicole), Sean and Raymond. Joe was the biggest New York Giants fan, and always enjoyed watching the games with his brother on Sundays. Joe was loved by many. Some of his favorite hobbies included riding his bike and going fishing. He also loved to play with dogs, especially Nikki and Marley. He was a kind, giving and genuine person who would give anyone the shirt off his back. While he lost his battle to cancer, he will be loved and missed by many. Joe’s family will receive friends from 10:30am until 11am on Thursday (Oct. 28th) in the Spilker Funeral Home, 815 Washington St., Cape May with Joe’s memorial ceremony, in the form of family and friends offering memories, thoughts and sentiments, beginning at 11am. In lieu of flowers, memorial contributions are suggested to Love of Linda Cancer Fund, online at https://loveoflinda.org/contribute

The family of Joe Bender created this Life Tributes page to make it easy to share your memories.