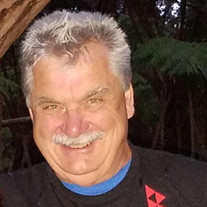 Joseph S. Andrzejczak Jr 12-29-50 to 5-4-20 Beloved husband of Deborah; devoted father to Joseph 3rd (Sheri) and Robert (Trish); loving stepfather to Theresa Speck (Matt) and Frederick Repetsky, Jr, (Kim) and 10 grandchildren, Macie and John, Bobby and Jana, Jonathan, Ron, Branna, Emilie, Juliet and Zachary. Joe's story started on 12-29-1950 as an only child to Joseph Sr. and Stella Andrzejczak. He was born in Manhattan NY, was raised on the Lower East Side, and as a teen moved to Lyndhurst, NJ where he graduated from Lyndhurst High School and made lifelong friends. From high school, he served his country in the United States Coast Guard and retired honorably as a Chief Petty Officer after 24 years of service. He landed at the Cape May/Lewes Ferry where he worked until he retired a second and final time in 2013. Joe met the love of his life, Debbie, through a mutual friend in 2002. They had a whirlwind romance and were married in Philadelphia, PA in 2004. They spent many years traveling, building their home and life in Villas, NJ. Joe and Debbie realized their dream of retiring to Hawaii where they moved in October 2019. Joe was well-known for his lack of patience, not holding back his opinion and knack for telling it like it is. He always told you the truth even if you didn't want to hear it. He was a gifted story-teller, usually taking much longer to get to the end than necessary. He is acclaimed for his gift of playing air guitar to Hotel California. He was known to his friends as Joe Aces, the Pathfinder, Coast Guard Joe, Joe Alphabet, Joe the Fuel King and lastly, Hawaiian Joe. He loved fishing, snorkeling, Gloria Estefan, Frank Sinatra, Fox News, the History Channel and above all, his family. Most importantly, he adored his SWEEEETIE Deb. Joe was a cook in the Coast Guard, a chef with the Grand Hotel and the Cape May Lewes Ferry; and had a philosophy to put hot sauce on everything. He had many requests for his Polish Kielbasi and sauerkraut along with his ribs & wings. Joe could frequently be heard mumbling under his breath "I gotta do everything" especially when thinking of the honey do lists Debbie made for him. Joe was a model of strong will and sheer determination right up until the end of his journey on earth. A celebration of Joe's life, following a Catholic Prayer Service, will be held on the grounds of the Cape May Lewes Ferry (behind the terminal), Route 9, North Cape May, NJ on July 11, 2020 at 1pm. The family requests everyone to wear Hawaiian shirts, shorts and flip flops. In lieu of flowers, the family requests donations to the American Cancer Society. info and condolences: www.spilkerfuneralhome.com

The family of Joe S. Andrzejczak Jr. created this Life Tributes page to make it easy to share your memories.