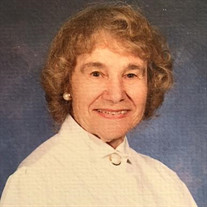 LUDWIGSEN (nee VanArtsdalen), Joan M. – 85, of North Cape May passed away peacefully on Thursday, January 19, 2017 in the comfort of her home with her family at her side. Raised in Merchantville/Cherry Hill, Joan has been a resident of North Cape May since 1987 after moving from Kingston, NY. Her family was her number one priority during her life; she was a devoted and loving daughter, wife, mother, grandmother, great grandmother and sister. An important part of Joan’s life was her passion for music. An accomplished singer, she was active in many choirs throughout her entire life. In her younger years she sang in Atlantic City with Rosemary Clooney. More recently, she was a 20+ year member of the Angelus Chorus, Cape May Court House and was also an active member in the Cape May United Methodist Church Choir. Joan was always physically active, she played competitive softball into her 40s and up until recently she could always be seen enjoying long walks in her neighborhood where she always had a kind word and spread good cheer. She is predeceased by her parents, John and Helen VanArtsdalen, and sister, Helen Korhammer. Joan is dearly missed by her loving family which includes her husband of 66 years, Jim; three sons, Jim, Gary (and Katrina) and Scott (and Karen); 6 grandchildren and 5 great grandchildren. The family would like to say a special thank you to Joan’s aide Juah as well as Eleanor, Nancy and others at Holy Redeemer Hospice NJ Shore. Funeral services will be held on Sunday (Jan. 22nd) at 3pm in the Cape May United Methodist Church, 635 Washington St., Cape May where friends will be received from 2pm until 2:50pm. Interment will take place privately the following day in Locustwood Memorial Park, Cherry Hill. In lieu of flowers, at Joan’s request, “please do something nice for someone you love."

LUDWIGSEN (nee VanArtsdalen), Joan M. &#8211; 85, of North Cape May passed away peacefully on Thursday, January 19, 2017 in the comfort of her home with her family at her side. Raised in Merchantville/Cherry Hill, Joan has been a resident of... View Obituary & Service Information

The family of Joan M. Ludwigsen created this Life Tributes page to make it easy to share your memories.