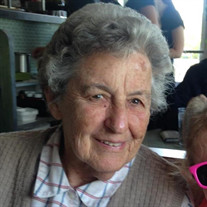 GREEN (nee Pocher), Joan P. – 91, of Cape May, passed away peacefully surrounded by family on Thursday, June 10, 2021. Born at home in Cape May, with multi-generational roots here in the city, she was a graduate of Cape May High School (1948) and furthered her education at Rider College where she earned her Business Degree in 1952. She went straight to work for the Law Offices of Albert Kahn, Trenton and was a valued contributor to the family firm for 45 years. Joan made cherished friends in so many Cape May clubs and charitable organizations. A stalwart supporter of the Greater Cape May Historical Society as treasurer, she was a “treasure.” She supported her church as a Captain in the Good Samaritans, giving rides and respite care to shut-ins and was known as “capemayroadrunner” online for her love of travel. She was a lifelong member of Cape May’s Corinthian Yacht Club and served on the race committee for many years. She volunteered at the Cape May Food closet right up until the pandemic hit. Though not a gardener, she loved flowers and was an avid member of the Garden Club. And she celebrated her love of food and fellowship with her friends in the beloved “Beach Bum” Red Hats. Joan was a devoted parishioner of Our Lady Star of the Sea, being baptized, confirmed, and married in the church. She is predeceased by her husband, William and her four brothers, Joseph, Donald, Charles and Walter and nephew Bill. Joan is dearly missed by her loving family which locally includes her nieces, Carolinn Pocher Woody (her caregiver), Ann Pocher Teauge, who selflessly cared for Joan at the end of her life, and nephew Christian-- among many others; as well as her step-daughter, Donna Hulings and step-grandchildren Donna Hulings Paul and Dale Hulings and their children. Joan’s Memorial Mass will be celebrated on Tuesday, June 15 at 9:30am at Our Lady Star of the Sea Church, 525 Washington Street., Cape May. Interment will be at a later date. In lieu of flowers, memorial contributions are suggested to the C. Wallace Stuard Sailing Foundation c/o Corinthian Yacht Club of Cape May, P.O. Box 260, Cape May, NJ 08204. (Spilker Funeral Home, Cape May) info and condolences: spilkerfuneralhome.com

GREEN (nee Pocher), Joan P. &#8211; 91, of Cape May, passed away peacefully surrounded by family on Thursday, June 10, 2021. Born at home in Cape May, with multi-generational roots here in the city, she was a graduate of Cape May High School... View Obituary & Service Information

The family of Joan Green created this Life Tributes page to make it easy to share your memories.