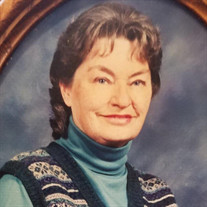 Joan C. Concannon, 83 of Cape May City, NJ went to be with the Lord early in morning of Thursday April 9th. Joan was born on June 21, 1936 to John and Lillian Daly in Lansdale, PA. She grew up in neighboring Colmar and Hatfield. She is predeceased by her brother, Jack Daly (1969). She will be missed by her sisters, Sarah Jane Daly and Jill Fermonte; her children, John and his children Sean and Erin; Michael, his wife Tammy and their children Laura and John; Bonnie and her daughter Courtney; Peter, his wife Vivian and their children Maya, Cooper, Myles, and Griffin. Joan grew up in Hatfield, PA and after graduating high school she served a term in the United States Air Force and was a member of its Marching Band. After getting married she lived in many places, including Ireland for a brief stint. Joan finally settled down and lived in Cape May since 1980. She was a devout member of the Cape Island Baptist Church and became a Deaconess. She had several jobs but was most known for greeting people as they came and went from Wildwood Crest as a Toll Taker on the Bridge. Joan took great pride in being a resident of Cape May. She walked every inch of the island multiple times. In fact, she would walk every morning, pick up stones on the beach and would proudly tell any who passed the house her entire driveway was entirely composed of beach rocks. Joan also took great pride in her garden that she inherited from her mother, Lillian. On many occasions visitors would take pictures of the house and garden. Patricia Rainey, a local painter, painted the house and sold it locally. Joan would go to craft shows on the boardwalk and always look for it, discretely moving it to the front of the pile to make sure everyone would see it. Joan proudly supported all the local shops and supported all her friend’s businesses. She was the Frame Shop’s biggest customer. When she wasn’t working or walking, Joan was knitting, she was constantly cross-stitching various pictures for every member of the family and for herself. She made all her children custom wedding pillows which are treasured to this day. She would have pictures framed and give to her children as gifts. They are hung and have been hung in the homes of her children with pride and will now serve as a memory of what she loved to do in her spare time. In addition to her love for Cape May, Joan loved and took great Pride in her children and her nine grandchildren. Whether she saw them regularly or only a few times due to distance she would always break out the photo albums if someone would drop by. If the grandkids stopped by, it was time to break out the Grammie mix, a concoction of a bunch of whatever was on sale at the Acme and M&Ms. Joan did whatever she could for all her kids and grandkids and was devoted to each and every one of them. Services will be held at a later time due to current conditions. In lieu of flowers a donation can be made to the Alzheimer’s Association in her name.

Joan C. Concannon, 83 of Cape May City, NJ went to be with the Lord early in morning of Thursday April 9th. Joan was born on June 21, 1936 to John and Lillian Daly in Lansdale, PA. She grew up in neighboring Colmar and Hatfield. She is predeceased... View Obituary & Service Information

The family of Joan Concannon created this Life Tributes page to make it easy to share your memories.