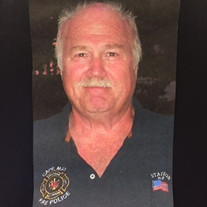 WYATT, James A., Sr. “JAWS” – 80, of Cape May and formerly of West Chester, PA passed away on Tuesday, November 8, 2016. Jim graduated from Villanova University with an Associate’s Degree in Business Administration. He worked in the field of office administration and was a Data Processing Manager for Curtis Publishing Co.; Chilton Publishing CO. and Alco Standard Co. He served as Captain of the Auxiliary Police Force of Washington Twp. from 1968-72. He was currently a Sergeant in the Cape May Fire Police, of which he had been a member since the inception of this special unit in Cape May. Jim was a former member of the Exton, PA Lions Club; former president of the Chester Co. Antique Car Club and was a current and active member of the Cape May Kiwanis Club, faithfully participating in their Meals on Wheels Program. Jim loved Cape May and planned his retirement and final years viewing the wonderful sunrise and sunsets of this special area. His mom brought him to Cape May for summers at the Seaside House. He loved roaming the beaches in his youth during blackouts of the war years when no light could be seen due to the security of the Delaware beaches. He loved the history of Cape May and the people who inhabit the city. The community was a gem to him and he freely gave his time to the community. He loved all the seasons in Cape May, especially fall and winter when the crowds left the city for the locals to enjoy. And, yes, he enjoyed the tourists, especially on change over days from his porch chair view during the last few years. He was always on the alert for fire police calls and always at the ready to serve and secure that intersection with his big white SUV and blue light. Cape May was his special place and he realized his dream come true. He was Cape May in heart, mind and body. Pop Wyatt was a guide and father to many he helped over the years. Our loss is deep as we try to carry on without our “John Wayne.” He is predeceased by his brother, George Wyatt (1968). Jim is dearly missed by his loving family which includes his wife of 43 years, Kathleen (nee Connor); three children, James (and Bernice) Wyatt, Jr., Kimberly (and Nicholas) Bay and Thomas (and Christy) Wyatt; two sisters, Mary Greico and Doris LaSanta; five grandchildren, Joshua, Jacqueline, James III, Noah and Josie; and two great grandchildren, Christian and Andrew. Mass of Christian Burial will be celebrated on Monday (Nov. 14th) at 1:30pm in Our Lady Star of the Sea Church, 525 Washington St., Cape May where there will be a viewing from 12:30pm to 1:20pm. Bishop Sullivan has designated Our Lady Star of the Sea as one of the “Jubilee Churches” which features a “Holy Door” which grants a special indulgence. The "Holy Door" is located on the Ocean Street side of the Church. In lieu of flowers, memorial contributions are suggested to the Kiwanis Club of Cape May, Animal Outreach of Cape May, or the Greater Cape May Historical Society. Interment will be private and at a later date. - Although this website offers many options to send flowers, PLEASE observe the request of the family to send a memorial contribution instead to the Kiwanis Club of Cape May, Animal Outreach of Cape May, or the Greater Cape May Historical Society.

The family of Jim Wyatt created this Life Tributes page to make it easy to share your memories.

Send flowers to the Wyatt family.