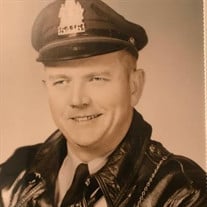 RONEY, James F. “Jim” – 90, of West Cape May and formerly of Philadelphia, PA passed away on Tuesday morning, March 6, 2018 in the comfort of his home with his family at his side. Jim was born in Philadelphia and resided there for many years before moving to West Cape May in 1988 where he and his wife, Pat had enjoyed summering since 1973. He was a graduate of West Catholic High School – Class of 1945. A man of honor, Jim proudly served in the United States Army during World War II and thereafter served in the Army Reserves, attaining the rank of Sergeant First Class. He enjoyed a career as a Philadelphia Police Officer before retiring. In 1965, Jim joined the Pennsylvania Air National Guard where he worked for the security police in the 111th Tactical Air Support Group based out of Willow Grove Naval Air Station attaining the rank of Senior Master Sergeant. Jim was very active within the West Cape May and Cape May Community. He served as Public Safety Commissioner of West Cape May Borough and had fun being Santa Claus for many years in the West Cape May Christmas Parade. He was a member and chaplain for the VFW Peterson-Little Post 386; a member of the Air Force Sergeants Assoc. and a member of the Air National Guard Hall of Fame. Devoted to his faith, Jim was an active member of Our Lady Star of the Sea Church, Cape May where he was also a Eucharistic Minister. Jim was a loyal friend and devoted family man. His kindness, warmth, and humor were evident in everything he did and experienced by everyone he met. He dearly loved and was loved by children. His grandchildren and great-grandchildren have sweet memories of curling up on Seashore Pop-Pop’s ample belly and being sung to sleep. His granddaughter Abby said this, “for someone with so many grandchildren and great-grandchildren I can say that you really knew each one of us individually and could recall moments from all of our childhood years—special moments you shared with us that you kept tucked in the pocket of your great big heart. Thank you for loving us.” He is predeceased by his son, John; brother, Jack and sisters, Helen, Fran and Noreen. Jim is forever loved and missed by his family which includes his wife of 69 years, Pat (nee Stanton); children, James (and Marianne) Roney, Charles (and Andrea) Roney, Marie Schmidt (and Rich Paul) and Joseph Roney; sister, Nancy Rooney; daughter-in-law, Susan Roney; brothers-in-law, Joseph Stanton (and Fred Ostermann) and Michael (and Patricia) Keller; 13 grandchildren and 15 great grandchildren. Mass of Christian Burial will be celebrated on Monday (Mar. 12th) at 1:30pm in Our Lady Star of the Sea Church, 525 Washington St., Cape May where there will be a viewing from 12:15pm until 1:15pm. Interment with military honors will follow in the Cape May County Veterans Cemetery. In lieu of flowers, memorial contributions are suggested to: Holy Redeemer Hospice, 1801 Rte. 9 North, Swainton, NJ 08210. (Spilker Funeral Home, Cape May) info and condolences: spilkerfuneralhome.com - Although this website offers many obvious options to send flowers, PLEASE OBSERVE the request of the family to consider a memorial contribution instead to: Holy Redeemer Hospice, 1801 Rte. 9 North, Swainton, NJ 08210.

The family of Jim Roney created this Life Tributes page to make it easy to share your memories.

Send flowers to the Roney family.