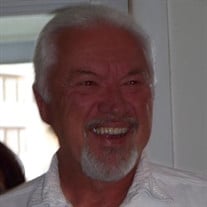 WALSH Jr., Gerald P. “Jerry” – 63, of Ocean View passed away peacefully on Monday morning, December 22, 2014 in the comfort of his home surrounded by his family. A man of honor, Jerry served in the United States Air Force and was a Veteran of the Vietnam War. Upon his return from the war, Jerry continued to work as an iron worker in Philadelphia. He was a hard and diligent worker. "Jerry" was compassionate, dedicated and full of wisdom; he was also known for his leadership. He had strong faith, he was full of life, he was the BEST! Jerry is dearly missed by his loving family, his wife, Maria; three children, Steven Walsh, Kevin Walsh and Sol Maria Quiles; five grandchildren, Cody, Antonio, Kaelyn, Daniel and Maria Nicole; brother, Michael Walsh; and sisters, Donna Taylor and Kathleen Foley, and many friends and extended family. Jerry’s memorial ceremony will be held on Saturday (Dec. 27th) at 2pm in the Corbin City Baptist Church, 212 Main St., Corbin City, NJ. Interment will be private and at a later date. In lieu of flowers, memorial contributions in Jerry’s memory are suggested to the Holy Redeemer Home Care Food Bank, 1801 Rte. 9 North, Swainton, NJ 08210. (Spilker Funeral Home, Cape May) info and condolences: spilkerfuneralhome.com

The family of Jerry Walsh created this Life Tributes page to make it easy to share your memories.

Send flowers to the Walsh family.