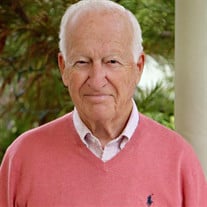 GAFFNEY, William Gerald (Jerry), of Cape May passed away peacefully in the comfort of his home on Friday, December 28, 2018. Born in Camden, Jerry was raised in Collingswood, NJ. Jerry enlisted in the Army in 1955 and served two years of active military service. He was stationed at Fort Dix, Washington, D.C., and Fort Polk, Louisiana. After completion of active duty, Jerry served an additional six years in the Army Reserve. Jerry married Mary Ann (Stokes) in 1956 and they lived in Medford Lakes where Jerry enjoyed 8 years on town council. Jerry worked as an insurance underwriter, but his love was local politics. In 1981, he became a resident of Cape May and became a fixture in local politics in Cape May serving 16 years on town council, four of those years as Mayor of Cape May. Jerry was also a volunteer at the Center for Community Arts, spending 10 years as a volunteer disc jockey on WCFA Radio. In addition, he worked as a tour guide at the WWII Tower for the Mid-Atlantic Center for the Arts in Cape May, climbing four flights of steps each work day to give visitors a taste of history. A man of great faith, he was a devoted and active member of Our Lady Star of the Sea Church, Cape May where he was a Eucharistic Minister for over 30 years. During his time as Cape May Mayor, Jerry officiated at the marriages of 360 couples and generously donated the proceeds. In the last few years, he began writing a book on his experiences officiating weddings. While Jerry was a man of the community and helped many people and organizations in the towns where he lived, his greatest trait was his dedication to his family. He was a wonderful husband and father, spending time and giving attention to his family. He loved playing golf or setting up his train set with his children and grandchildren, spending time with his grandchildren’s activities, sitting on the porch for cocktails discussing politics and spending late afternoons on the beach with Mary Ann. He was predeceased in 2017 by Mary Ann, his beloved wife of 61 years. Jerry is dearly missed by his loving family which includes his five children, Mary Pat Myers (and Guy Portewig), Katie (and Joe) Silvernail, Ann (and Frank) Zilinek, Teri (and Donny) Arndt and Jerry (and Debby) Gaffney; seven grandchildren, Derek, Joshua, Hunter, David, Kristina, Abigail and Benjamin; his sisters and brothers-in-law, especially, Kathy and Brendan Brogan, Pat and John Stokes, as well as nieces and nephews. Jerry’s Mass of Christian Burial will be celebrated on Saturday (January 5th) at 11am in Our Lady Star of the Sea Church, 525 Washington St., Cape May where friends will be received by the family from 9:30am until 10:50am. Interment will take place privately in Cold Spring Cemetery, Lower Twp. In lieu of flowers, memorial contributions are suggested through “In Memory Of’ for convenience and acknowledgment purposes to benefit St. Jude Children’s Research Hospital, online at www.inmemof.org/jerry-gaffney or checks can be made to “In Memory Of” PO Box 5472, Charlottesville, VA 22905. (Spilker Funeral Home, Cape May) info and condolences: spilkerfuneralhome.com

GAFFNEY, William Gerald (Jerry), of Cape May passed away peacefully in the comfort of his home on Friday, December 28, 2018. Born in Camden, Jerry was raised in Collingswood, NJ. Jerry enlisted in the Army in 1955 and served two years of active... View Obituary & Service Information

The family of Jerry Gaffney created this Life Tributes page to make it easy to share your memories.

GAFFNEY, William Gerald (Jerry), of Cape May passed away peacefully...