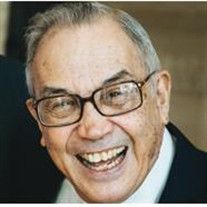 JEROME J. VALLEN October 2, 1928 – July 30, 2020 Jerome J. “Jerry” Vallen, beloved husband, father, grandfather, and educator, passed away peacefully July 30, 2020 surrounded by family at the age of 91. Jerome was born October 2, 1928 in Philadelphia, PA and attended West Philadelphia High where he met and married the love of his life, Florence “Flossie” (Levinson) Vallen. They were married for 66 years until her passing in 2017. He is survived by his four children, Marc (Mary) Vallen, Gary (Kim) Vallen, Randy Vallen, Rebecca (Frank) Gabriele, his 11 grandchildren (Jessica, Katie, Sarah, Lisa, Laura, Maxton, Grace, Melissa, Brian, Julia Claire, and Justin), 4 great grandchildren (Josiah, Jayden, Mikayla, and Emerson) and many nieces and nephews. He was preceded in death by his parents, Harold and Frances Vallen, and his two brothers, Milton Vallen and Bernard Velenchik. Jerry is a Korean War veteran and served in the Second Armored Cavalry in Germany. Prior to his enlistment, he received a Bachelor of Science in Hotel Administration from Cornell University in 1950. After working in the hotel industry for several years, he moved to Canton, NY and into academia serving as the Chair of the Hospitality Program at the State University of New York, Canton. He completed his Masters of Education at St. Lawrence University in 1957, and returned to Cornell to obtain a PhD in Hotel Administration in 1976. Jerry and Flossie moved their family from Canton, NY to Las Vegas in 1967 as he became the founding Dean of the College of Hotel Administration at UNLV (originally the Nevada Southern University). “With characteristic persistence and charm, Dean Vallen chipped away at every obstacle he encountered, fostering an unprecedented alliance with the hotel industry and bringing to bear a new educational model that spawned an era of hospitality superstars.” www.unlv.edu/news/article/man-who-started-it-all. Due to his pivotal role as founding Dean of the William F. Harrah College of Hospitality and the impact of the program, he was named to the Las Vegas Review Journal “First 100” most influential people of the 20th century in Las Vegas. Jerry retired as Dean in 1989 after twenty-two years and then continued to teach at UNLV for many additional years. He authored numerous publications and multiple textbooks. Jerry served two terms as President of CHRIE (Council on Hotel, Restaurant and Institutional Education). He was a recipient of the Lamp of Learning from the Educational Institute, was inducted into the Distinguished College of Diplomates, earned a Full Professorship, and received the Meek Award for Excellence in Education. Jerry and Flossie had the unique opportunity to travel the world as a Special Trade Representative with the United States Department of Commerce, visiting over 45 countries. They also spent several years living in Germany and in Australia where Jerry helped found Bond University and expand Griffith University. It was Jerry’s commitment to an open-door policy that made him a beloved educator and influencer of many top executives in the hospitality industry today. But his biggest legacy was his influence on his family and his example of humility, kindness, volunteerism, and lifelong learning. Jerry was a renaissance man who could recite a classical poem almost to the word when asked. He was a veracious crossword puzzler and master card player. Jerome will be interred next to his beloved wife, Florence, at the Southern Nevada Veterans Memorial Cemetery in Boulder City. The family will hold a small private service followed by a Celebration of Life to be held in Las Vegas sometime during summer 2021. Details for the Celebration of Life will be placed in the Review Journal and through the Harrah College of Hospitality. The family has requested that in lieu of flowers, gifts may be made to the Jerry and Flossie Professorship Endowment at UNLV. Checks may be made out to: UNLV Foundation, memo: Vallen Professorship; mail to: UNLV Foundation, Box 451006, 4505 S. Maryland Pkwy., Las Vegas, NV 89154-1006; or give online: https://www.unlv.edu/philanthropy/give-online Click "Tribute & Memorial Gifts" and select "Jerry and Flossie Vallen Professorship." Rest in Peace, Dad. Give Mom a hug, your legacy lives on. We will miss you. The Review Journal in Las Vegas interview/write-up can be read by clicking on the following link https://www.reviewjournal.com/local/education/jerry-vallen-founding-dean-of-unlv-hospitality-school-dies-at-91-2084700/

The family of Jerome "Jerry" Vallen created this Life Tributes page to make it easy to share your memories.