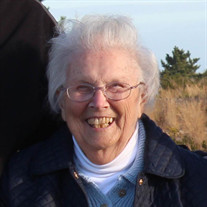 BRETHERICK (nee Sipler), Jean - age 90, died on Sunday, June 28, 2015 in the comfort of her home surrounded by her family following a five year battle with breast cancer. Jean's husband of sixty one years, Donald Bretherick, died in 2009. Jean was a resident of Springfield, Delaware County, Pennsylvania for over fifty years. She spent most of the summers of her life in Cape May Point and moved there permanently five years ago. Jean was a graduate of Darby High School and West Chester State College. She worked as an elementary school teacher in Folcroft, Pennsylvania for many years. Jean was a role model for great things. She was an involved and devoted wife, mother, sister, aunt and grandmother. Jean was the highly respected and much loved matriarch for her extended family and for many members of her community. Jean was an insightful listener and a good friend. People of all ages wanted to talk with her to get her advice and counsel. Jean was consistently thankful for the life that she had in spite of any challenges that she faced. Jean is survived by her son, Donald Paul Bretherick and his wife, Nancy Criswell and her daughter, Karen Bretherick Peetz and her husband, David. Jean is also survived by several grandchildren: Alison Bretherick, David Peetz, Jr. and Katherine Peetz Mack and her husband, James. Jean had one great granddaughter, her namesake, Jean Mack. The family wishes to extend special thanks to the Cape May Point Community, and particularly the Trustees and Women’s Guild of St. Peter’s by-the-Sea Episcopal Church, for their friendship and kindness to Jean throughout her life. They also wish to thank Holy Redeemer Hospice Care for their compassionate and outstanding care. A memorial service will be held on Saturday, August 8th at 11am at St. Peter's by-the-Sea Episcopal Church, 102 Lake Dr., Cape May Point. In lieu of flowers, donations can be made to: St. Peter's by-the-Sea Episcopal Church, PO Box 261, Cape May Point, NJ 08212 or to Breast Cancer Research, Memorial Sloan Kettering Cancer Center, P.O. Box 5028, Hagerstown, MD 21740-5028. (Spilker Funeral Home, Cape May) info and condolences: spilkerfuneralhome.com - Even though this website offers the option of sending flowers, please observe the request of the family to send a memorial contribution to the addresses named in the obituary.

The family of Jean S. Bretherick created this Life Tributes page to make it easy to share your memories.

Send flowers to the Bretherick family.