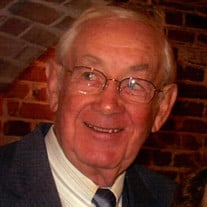 KIRMAN, James S. -89, of Cape May, N.J. passed away peacefully on Friday, July 10, 2015 with his family at his side in the comfort of his home. Jay was a longtime summer resident of Cape May before moving here permanently in 1989 from Springfield, Delaware Co., PA. He owned and managed Gabe’s Speedometer Service in South Philadelphia for more than 40 years before retiring in 1988. Jay was blessed with an adventurous, inquisitive nature and was accomplished at everything he chose to focus on. At the age of 15, before he could even drive, Jay received his pilot’s license and became an acrobatic pilot. He was a natural born flyer and loved to scare his friends, sometimes flying upside down under the Philadelphia bridges. As an extension of his flying career, Jay also built model airplanes and won many competitions in this unique pastime. Jay was also an accomplished musician and played the guitar for most of his life, with a particular interest in country and gospel music and enjoyed singing at church. When he was in his 40s, he virtually memorized the bible and dedicated himself to a Christian life. In comparison to his earlier adventurous life, Jay became an avid fisherman and intimately knew the best fishing areas from Atlantic City to Delaware. He loved the competitive sport of fishing and spent his summers in pursuit of “the big one.” Jay also loved nature, particularly, the unique wildlife surrounding his home in Cape May where everything from seagulls to skunks and even wild turkeys would stop by for a meal. He was also an avid gardener and always had fruit and vegetables to share with his neighbors. Jay is dearly missed by his family including his wife of 68 years, Bernadette Kirman, his daughter Diane Kirman Raffill and son-in-law Stewart, his granddaughter Brittany Raffill LaHay and husband Gerald LaHay and great grandson, Hunter LaHay. Jay is also survived by his brother, Beryl Kirman, of Clearwater, Florida. Burial services will be held privately. (Spilker Funeral Home, Cape May) info and condolences: spilkerfuneralhome.com

KIRMAN, James S. -89, of Cape May, N.J. passed away peacefully on Friday, July 10, 2015 with his family at his side in the comfort of his home. Jay was a longtime summer resident of Cape May before moving here permanently in 1989 from Springfield,... View Obituary & Service Information

The family of Jay Kirman created this Life Tributes page to make it easy to share your memories.

Send flowers to the Kirman family.