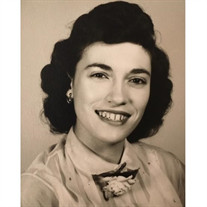 PERRI, Jane K. – 86, of Cape May passed away late night on Friday, March 27, 2020 as she held the hands of her beloved granddaughter and son. Born on May 27, 1933 in Northeast Philadelphia, and later as a teenager, Jane lived in several different areas including but not limited to Guam and California, as she followed her mother, Elizabeth “Betty” Diehm and her stepfather, Stanley Groch a United States Marine, during World War II. Post war, she returned to her home in Philadelphia, where sometime after her mother’s death in the mid-1950s, she met, then later married her lifelong husband, who predeceased her on March 29, 2014. Jane was a devoted member of the Christ Child Society, long-time parishioner of Our Lady Star of the Sea Roman Catholic Church and belonged to the Red Hats Society and Garden Club. Jane was a deeply spiritual person, arguably the kindest, most considerate and giving person known, as she always put the needs of others above her own. She enjoyed social gatherings especially with good music and dancing. She always made everyone feel so welcomed and loved, making everything so special with dinners and holidays, as she adorned the home with the most beautiful Christmas decorations, a glorious tree and perfectly wrapped Christmas gifts. She was talented in art made evident by her beautiful penmanship, ceramics, paintings, knitting and crocheting. She was a genuine animal lover with her 5 dogs, including Dusty, Cleo and Samson and the stray kitten she took in over 15 years ago, Weebee, sadly languishing under the loving care of her granddaughter, whom she is so proud of and calls an angel. For years Jane has been feeding and caring for neighborhood cats, a duty presently carried on by her son and granddaughter. She enjoyed a loving marriage of 55 years to the late, Anthony G. “Bud” Perri (2014). She is also predeceased by her brother, Charles “Cholley” Diehm (2015). Jane is dearly missed and forever loved by her family which includes her son, Anthony J. (and Lori) Perri; granddaughter, Amanda Jane Perri and her beloved cat, Weebee. Simply stated, she was a magnificent, genuine soul and the world is a lesser place without her. Live-stream accessibility only, via http://client.tribucast.com/tcid/42280791 Jane’s live-stream will begin at 10:30am on Thursday (April 2nd) with an open casket, and her brief Catholic ceremony will begin at 11am. Please, do not come to the funeral home. Private entombment will follow in St. Mary’s Cem. Mausoleum, Cape May. In lieu of flowers, memorial contributions are suggested to the Christ Child Society, PO Box 882, N. Cape May, NJ 08204. (Spilker Funeral Home, Cape May) info and condolences: spilkerfuneralhome.com

PERRI, Jane K. &#8211; 86, of Cape May passed away late night on Friday, March 27, 2020 as she held the hands of her beloved granddaughter and son. Born on May 27, 1933 in Northeast Philadelphia, and later as a teenager, Jane lived in several... View Obituary & Service Information

The family of Jane Perri created this Life Tributes page to make it easy to share your memories.