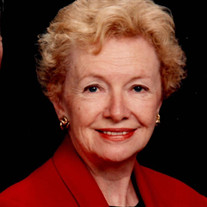 BARND, NORMA JANE – 94, of North Cape May was peacefully called home on Saturday, July 24th, 2021. Jane was born in Philadelphia PA to the late William “Bill” Billings and Agnes C. Billings (nee Fols) on August 30, 1926. She was a graduate of Woodbury High School, class of ’44 and moving to Cape May shortly thereafter, worked for “Pop” Dellas’ Agency, attended the USO dances where she met her forever dancing partner and married at the United Methodist Church of Cape May on November 15, 1947. After residing in Buffalo, NY, Camden, NJ and again Cape May, the family moved to Woodbury, NJ in 1955 where Jane was a member of the Kemble Methodist Church for 35 years. Her love of the Lord inspired her devotion of giving a lifetime of service to her home churches. She also served as a past president of the Underwood Hospital Junior Auxiliary and is known for helping to organize the hospital’s Volunteer Service. She also enjoyed being a member of the Women’s Club of Woodbury. Jane worked at RCA Parts and Accessories in the Data Processing Department and was later employed by Charles B. Slack, Inc. of Thorofare, NJ, a medical conference management firm and publisher of medical journals. She held the position of exhibit manager for the firm’s medical conventions held throughout the country which gave her the opportunity to travel extensively. Retirement brought her back to Cape May in 1986. She became a member of the United Methodist Church of Cape May where she, once again, volunteered her time on various committees and served as President of the United Methodist Women. Another organization in which Jane enjoyed membership was the Women’s Community Club of Cape May. Her very favorite things to do included dancing, bible study, playing bridge, reading, entertaining, theater and getting to the hairdresser every week no matter what. (A running family joke). Jane is dearly missed by her loving family which includes two children, Kathy Mottola of Cape May and Jeffrey (and wife Rafaela) Barnd of Massachusetts; three grandchildren, Michael, Abigail and Ava; nephew, Robert (and wife Julie) Barnd of Amherst NY, and niece, Karen (and husband John) Zell of Pleasantville, NJ. She is predeceased by her husband of 67 years, Robert “Bob” Barnd. Jane’s memorial service will take place on Tuesday, August 24th at the United Methodist Church of Cape May, 635 Washington St., Cape May, where friends will be received from 10am – 11am; service to follow at 11am. Interment is private and at a later date. Masks are not mandatory; please take Covid precautions. In lieu of flowers, memorial contributions are suggested to the United Methodist Church of Cape May, at the above address in Cape May, NJ 08204, or a charity of the donor’s choice.

The family of Jane Barnd created this Life Tributes page to make it easy to share your memories.

BARND, NORMA JANE – 94, of North Cape May was peacefully called...