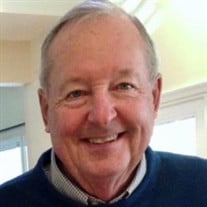 James M. Thompson II “Skip” 79, of Cape May, passed away peacefully on Wednesday, September 30th, surrounded by his loving family. Born in Philadelphia, PA, and raised in Haddonfield, James was a graduate of Haddonfield High School. He graduated from Tusculum College where he competed as a two-sport athlete and met the love of his life, Patricia Ann Kiracofe. James and Patricia moved to Fogelsville, PA and together began their lifelong careers as educators. He obtained a Master’s in Educational Leadership from Lehigh University. The couple moved to Haddonfield, and later Woodbury, to raise their three daughters. Skip was heavily involved in many areas within his community. Highlights include serving as the President of the Board of Education for Woodbury Public Schools, and many years of coaching. He was an active member of the Woodbury Presbyterian Church and an involved parent volunteer for Wenonah Swim Club. With his best friend by his side, Skip was a beloved announcer at many swim meets. He was the founder and self-appointed President of the South Jersey Fishing Club and TC painting. Though his family spent countless summers as residents of The Hideout in Lake Ariel, PA, upon retirement Skip returned to his ancestral roots to live out his days in his family home in Cape May. Skip served the community of Gloucester Township for over thirty years in various administrative positions including the Principal of Blackwood Elementary and Director of Special Services for the Gloucester Township School District. Throughout those years, he made a difference for many children and developed lifelong friendships with many of his colleagues. After retiring, Skip briefly served as an interim Principal/Chief School Officer in Sea Isle City. Skip enjoyed sports both as a participant and a fan. Fly fishing with his buddies, especially at Pine Creek, was one of his favorite pastimes. His love of traveling took him on many adventures. Trips to Tennessee and the Outer Banks topped his list! He loved engaging with family and friends on the beach, sitting on the porch, hanging in the backyard with his dogs and other “pets”, entertaining friends at 1015, dining at his favorite restaurants, spending time with his three “A’s” and watching his grandchildren do what they love most. Skip was truly a people person; always looking for an opportunity to share his life experiences and chat with others. Dearly missed and forever loved by his family which includes his wife of nearly 57 years, Patricia; three daughters: Anne (and Keith) Brook, Allison (and Matt) Simpson, Abigail (and Tony) Johnson; his loving sister RuthAnne (James) Stewart, brother-in-law Ralph (Judy) Kiracofe; loving “Poppy” to grandchildren Zachary and Madelyn Brook; Grace and Emerson Simpson; and Danielle, Nick, Chloe, Sydney, and Hannah Johnson; nephew J.T. (Melissa) Stewart and grand-nephew Connor Stewart. James leaves behind a host of countless friends old, new, near and far. He will be remembered as a man with a warm smile, generous heart, kind spirit and love for all who crossed his path. A celebration of Skip's life will take place at a later date. Memorial donations can be made in his honor to: Tusculum University Baseball 60 Shiloh Road Greeneville, TN 37743 Carson Newman University Baseball 2130 S. Branner Ave. Jefferson City, TN 37760 Best Friends Animal Society [email protected]

James M. Thompson II &#8220;Skip&#8221; 79, of Cape May, passed away peacefully on Wednesday, September 30th, surrounded by his loving family. Born in Philadelphia, PA, and raised in Haddonfield, James was a graduate of Haddonfield High School.... View Obituary & Service Information

The family of James "Skip" Thompson created this Life Tributes page to make it easy to share your memories.