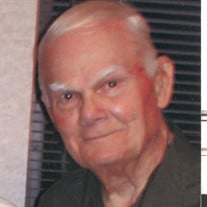 BARNES Jr., George F. “Jake” - of Cape May passed away Monday, July 20, 2015 after a short illness. He was 91. Known to friends and family as "Jake," he was a loving husband and father, a proud grandfather, a generous and witty friend, a strong role model, a giver of honest advice and the possessor of a kind and humble heart. Jake grew up in Morgantown, W.V., where he starred on the basketball team at Morgantown High School. He served in World War II as a B-24 tailgunner in the 828th Bombardment Squadron, flying dozens of missions over Germany. Upon his return, he attended West Virginia University and graduated in 1949, becoming a proud alum for the rest of his days. After working in sales, he became a high school English teacher and basketball coach at Largo High School in Upper Marlboro, MD. After moving to Cape May in 1979, he worked for 20 years at the Village Bicycle Shop. He and his wife, Mary Anne, also spent springtimes in St. Pete Beach, Fla., amid the warm embrace of many friends in the Envoy Point community. Jake was a man of varied interests. He loved literature and memorized poems. He analyzed basketball games and cooked breakfast. He fished for sheepshead off the Gulf of Mexico, and he lived for long afternoons in his woodworking shop, making furniture for friends and family. He is dearly missed by his loving family which includes his wife of 29 years, Mary Anne; his son Jeff (Marita) of Salisbury, MD; his daughters Jennifer, Patti Anne Wall (Greg) of Alloway, NJ, Kathleen Tobin (Thomas) of St. Petersburg, FL, and Mary Beth Brown (Dave) of Erma, NJ; 14 grandchildren and eight great-grandchildren. There will be a viewing in the Spilker Funeral Home, 815 Washington St., Cape May on Thursday from 6pm – 8pm and again on Friday morning from 10am – 11am with funeral services beginning at 11am in the funeral home. Interment with military honors will follow in the Cold Spring Cemetery - Field of Honor, Lower Twp. In lieu of flowers, memorial contributions are suggested to your favorite charity in memory of Jake. Info and condolences: spilkerfuneralhome.com -

The family of Jake Barnes created this Life Tributes page to make it easy to share your memories.

Send flowers to the Barnes family.