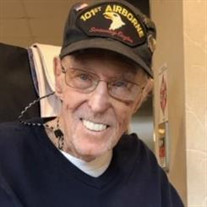 Reid, John P. “Jack” – 93, of Cape May and Venice, FL passed away peacefully on Wednesday, December 19, 2018. Jack honorably served in the United States Army during World War II and upon his return home, enrolled at Lasalle University on the G.I. Bill where he earned his Bachelor’s Degree in Business in 1952. In 1965, he and his late wife, Teri, founded the Capri Motor Lodge in Cape May. They operated this business together for many years before their retirement and the Capri has continued on under the ownership and management of their two daughters. In more recent years, Jack was all too happy to help his daughters by running the errands of the business. In Cape May, he made regular appearances at the Post Office, Sturdy Bank and Swain’s Hardware where he was always cordial and greeted friends and new acquaintances with his great smile. Jack piloted his own airplane for many years and enjoyed days on his Harley-Davidson as well. Without outward display, Jack was truly proud of his Irish Heritage and was quick to mention this in conversation. He is predeceased by the love of his life, Teri Reid (2006), as well as his son, John Reid. Jack is dearly missed by his loving family which includes his two daughters, Terese (and Dicky) Thompson and Patty (and James) Schmucker; son, Donald Reid; grandchildren, Zachary, Rebecca, Abigail, James, Jacquelyn, Isabella, Cassandra and Kimberly. Mass of Christian Burial will be celebrated on Wednesday (Dec. 26th) at 1:30pm in Our Lady Star of the Sea Church, 525 Washington St., where friends will be received from 12:30pm until 1:20pm. Entombment will follow in St. Mary’s Cem., Cape May. In lieu of flowers, memorial contributions are suggested to: Naval Air Station Wildwood, 500 Forrestal Rd., Rio Grande, NJ 08242. (Spilker Funeral Home, Cape May) info and condolences: spilkerfuneralhome.com

The family of Jack Reid created this Life Tributes page to make it easy to share your memories.