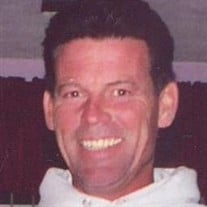 McLAUGHLIN, JOHN J. “JACK” – 59, of Villas passed away peacefully on Wednesday, December 28, 2016. Born in Philadelphia, PA, Jack has been a resident of Villas since 1983. During his younger years and while living in the Philadelphia area he was a Golden Gloves Boxer. Jack was truly one of a kind, a man of few words but one of great actions. He loved to help family and friends and was so humble in doing so. His smile, sense of humor and his laugh always made him the life of the party. His love and loyalty to his family was unconditional. Some of Jack’s most treasured moments were spent with bikes rides to the bay to enjoy beautiful sunsets; lounging in the pool; doing puzzles and watching his favorite football team for decades - lose week after week in his EAGLES MAN CAVE. With dedication and a remarkable work ethic, Jack took great pride in the work he did as a painter while employed by Robert Ferguson & Sons over the past 23 years. Predeceased by his parents, William and Henrietta McLaughlin, Jack is dearly missed by his loving family which includes his wife, Anne (nee McCarthy); daughter, Antoinette McCarthy; son, John McLaughlin, Jr.; five siblings, Shelly (and Paul) DiRenzo, Billy McLaughlin, Bruce (and Marianne) McLaughlin, Scott McLaughlin and Kelly (and Mark) Magliocco; also his in-laws, nieces, nephews, dear friends and co-workers. Please wear your Eagles attire and/or your favorite shade of Eagles green to Jack’s funeral service which will be held on Tuesday (Jan. 3rd) at 11am in the First Assembly of God Church, 1068 Seashore Rd., Cape May where friends will be received from 10am – 10:50am. Interment will take place privately and at a later date. In lieu of flowers, memorial contributions are suggested to: Brendan Borek High Tides Fund, PO Box 41, Avalon, NJ 08202. Although this website offers many options to send flowers, PLEASE observe the request of the family to send a memorial contribution instead to: Brendan Borek High Tides Fund, PO Box 41, Avalon, NJ 08202.

The family of Jack McLaughlin created this Life Tributes page to make it easy to share your memories.

Send flowers to the McLaughlin family.