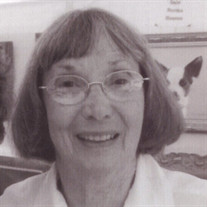 EWING (nee Oleksiak), Irene E. – 82, of Cape May passed away peacefully on Thursday evening, August 28, 2014. Irene was born December 30, 1931 in Newark, NJ to Julia and Joseph Oleksiak. She met Richard (Dick) Ewing while visiting Cape May as a teenager with her brothers Chet and Eddie. Irene and Dick were married November 29, 1952. Irene moved from the city to the country and promptly “adopted” a newborn pig she named Porky which she raised in her home. Irene and Dick opened Ewing’s Creamy Freeze custard stand and Irene managed it for years. She then convinced Dick to build the Jersey Cape Motel in 1974 and she very successfully managed the business until 2004. Irene and Dick enjoyed touring the USA in their motorhome, and spent many winters in Estero, FL. Irene attended Arts High School in Newark, the first public high school in the United States specializing in visual and performing arts. This was the start of a lifelong love of oil painting. She joined Father Shelton’s St. Barnabas art group in the mid 1960s and painted with the gang for more than 20 years. Irene was an award winning oil painter. She visited Italy and Egypt with the art group as well as vacationing in St. Thomas with them for many years. Irene was a very active member of the Cold Spring Presbyterian Church, including choir, Sunday School teacher, and coordinator of the men’s dinners. In 1990 Irene went on a pilgrimage to the holy site, Medjugorje, Yugoslavia. She then returned to her Catholic roots and became a member of Our Lady Star of the Sea Catholic Church. Ultimately, Irene lost her battle with Alzheimer’s after a long and tough fight but she never lost her spirit. Many thanks to Irene’s wonderful caregivers including those at Griswold Home Care, Emeritus, Grace Hospice, and Visiting Angels. She is predeceased by her husband, Richard R. Ewing (1986) and her brother, Edward Oleksiak. Irene will be dearly missed by her loving family which includes her three children, Debra (and Bill) Halloran, Steven R. (and Mary Beth) Ewing and Richard A. (and Terry) Ewing; eight grandchildren, Patrick (and Courtney), Andrew, Kevin, Gordon, Jessica, John, Mike and Ben; four great grandchildren, Jamae, Hunter, Scarlet and Kyle; one brother, Chet (and Alice) Oleksiak and a sister-in-law, Stella Oleksiak. Mass of Christian Burial will be celebrated on Thursday (Sept. 4th) at 1:30pm in Our Lady Star of the Sea Church, 525 Washington St., where friends will be received from 12:30pm – 1:30pm. Interment will follow in Cold Spring Cemetery, Lower Township. In lieu of flowers, memorial contributions are suggested to: The Ministries of Our Lady Star of the Sea Parish in Cape May.

The family of Irene E. Ewing created this Life Tributes page to make it easy to share your memories.

Send flowers to the Ewing family.