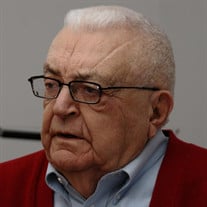 Howard Robert Ferguson, better known as Ferg or “Fergie,” was born in Utica, New York on March 20, 1921. He was the only child of Lena Flaming and Edward Carver Ferguson. His father worked for Metropolitan Sewing Machine Company in the Textile Industry and the family moved around across the country during his early years, living in various cities including Rome, NY, Buffalo, NY, Seattle, WA, Quincy, MA and then finally Nyack, NY. “I was mechanical, inventive, artistic, coordinated, and musical; but not a scholar,” said Ferg in one of his own hand-typed memoirs. As a boy, Fergie learned to ski in Seattle, which became a lifelong hobby shared with family and friends. While he was at Nyack High School, in New York, he played ice hockey and developed his interest in woodworking - a skill Ferg utilized throughout his life, from boatbuilding and to later building homes with his father-in-law, Gus Svahn, throughout the Valley Cottage area. Ferg was also well-known for his concerts in the barn at their home at 326 Old Mill Road in Valley Cottage, NY where he and friends would play music for hours, himself on the drums. Ferg attended Pratt Institute where he took a 3-year certificate course in Design. During World War II, he taught Art at Nyack High School. His proudest accomplishment was working for the industrial designer Raymond Loewy in New York City. Fergie was extremely creative and throughout his life was always generating things, like sculpture and gadgets. Fergie met his wife AnnaStina Svahn while playing tennis in Nyack, NY. He attributed their meeting to something of both destiny and good luck. Stina and Fergie were married for 72 years until her death in August of 2020. Not only did he fall in love with her but; he also embraced the family’s Swedish traditions and heritage. They had their only daughter, Jill, in 1956 in Valley Cottage, NY, where they lived actively and happily for over 44 years. The family spent their summers in Cape May, NJ on the famous Yacht Avenue. Ferg became very good friends with Captain Johnny Roberts and other local flavors. He loved racing sailboats and spending time on the water. The decision to retire to Cape May was a natural one for Ferg. Time was spent in between their new home, on Virginia Ave, and with Jill and her husband, Rod Henderer, in the Boathouse on Yacht Ave. There Fergie, or Papa, taught his two grandchildren, Anna Stina and Peter Rodman Henderer, many, many life lessons. As someone who loved to think creatively and solve problems, Ferg also quickly became involved in local Cape May politics and would hold council in his wing at his home, always at the ready to listen and give advice to all. Old Man Ferg celebrated his 100th birthday on March 20, 2021. Up until his very last days here, he had an uncanny ability to recall the past, tell stories and discuss common interests with friends and family. We will always hold memories of him in this way. A celebration of Ferg’s life, and of his wife’s Stina’s, will be held at a later date. In lieu of flowers or gifts, donations can be made in Ferg’s honor to the Cape May Volunteer Fire Company.

Howard Robert Ferguson, better known as Ferg or &#8220;Fergie,&#8221; was born in Utica, New York on March 20, 1921. He was the only child of Lena Flaming and Edward Carver Ferguson. His father worked for Metropolitan Sewing Machine Company... View Obituary & Service Information

The family of Howard "Fergie" Ferguson created this Life Tributes page to make it easy to share your memories.

Howard Robert Ferguson, better known as Ferg or “Fergie,” was...