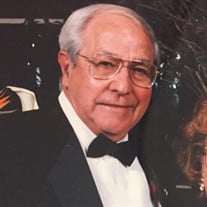 Herman T. Altobelli – 89, of Cape May passed away peacefully at home on June 6, 2017 after a courageous battle with old age. The son of Italian immigrants, he was born and raised in Dudley Pennsylvania until in his mid-teens when the family moved to Elizabeth, NJ. After serving his country in the Navy at the end of WWll and traveling the world, Herman came home and married his childhood sweetheart, Rose Svitana in Hopewell, Pennsylvania. The couple started their lives together in Elizabeth, NJ, moved to Plainfield and then to Fanwood, NJ in 1966. They celebrated their 69th wedding anniversary the day before he died, on June 5th. Herman always had an incredible zest for life and an intense love of flying; he received his private pilot’s license at the age of 19, followed by an instrument rating, and finally his commercial rating in his mid-30s. He was an extremely skilled pilot and flew nearly every week. Herman purchased his first plane in his mid-30’s and never looked back. He owned a plane until he could no longer fly, because of health reasons, at the age of 72. Herman spent his entire career with the Allstate Insurance Company in various management positions. Herman and Rose moved to Cape May in 1986 and loved it from the start. They quickly became involved in their church, Our Lady Star of the Sea, in Cape May, and Herman rose to the position of Grand Knight in the Knights of Columbus. An avid boatman and fisherman, Herman was very active in the Coast Guard Auxiliary and was involved for over 25 years. He became treasurer and received his coxswain rating in addition to his designation as Aircraft Commander. But what most will remember about him was his indominable spirit and his cheerful disposition. He had many friends and made friends easily. He was always willing to lend a helping hand and when asked a few months ago how he would like to be remembered, he said simply, “As a Good Guy.” And he will. Herman is dearly missed by his loving family which includes his wife of 69 years, Rose Altobelli; three children, Louis (and Jane Altobelli), Andrew (and Sue Altobelli) Lisa (and Len Hehir) six grandchildren, Louis (and Kim), Andrew (and Heather), Jennifer (and Philip), Matthew (and Christina), Maura, and Michael, and twelve great grandchildren, Nicoletta, Andrew Jr., Sofia, Tyler, Dominic, Camille, Xavier, Cecily, Vienna, Mario, Anthony, and Kimber, as well as two sisters and two brothers, Florence, Anthrene, Frank, and Louis, and many nieces and nephews. He was pre-deceased by his sisters, Minnie and Julia and his brother, Alfred. Relatives and friends are invited to attend Herman’s viewing on Sunday (June 11th) from 6pm – 8pm in the Spilker Funeral Home, 815 Washington St., Cape May. Mass of Christian Burial will be celebrated on Monday (June 12th) at 1:30pm in Our Lady Star of the Sea Church, 525 Washington St., Cape May where there will also be a viewing from 12:30pm until 1:20pm. Interment will follow in St. Mary’s Cemetery, Cape May. Memorial contributions are suggested to: www.alz.org/donate

Herman T. Altobelli &#8211; 89, of Cape May passed away peacefully at home on June 6, 2017 after a courageous battle with old age. The son of Italian immigrants, he was born and raised in Dudley Pennsylvania until in his mid-teens when the family... View Obituary & Service Information

The family of Herman T. Altobelli created this Life Tributes page to make it easy to share your memories.

Herman T. Altobelli – 89, of Cape May passed away peacefully...

Send flowers to the Altobelli family.