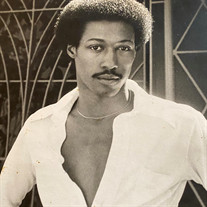 Henrie (Misha) M. Washington Jr. Henrie McQueen Washington, 68, of Wilmington, North Carolina left this world to rest with the Lord on September 23, 2020 while living in Cape May, New Jersey. Henrie, known in his younger years as Misha, one half to the famous Bay Area roller skating duo “Misha and The Capricorn Kid” was a man who loved to and did experience life to the fullest. While living in San Francisco he met Monika Arnett and had his first daughter, Satin-Deseree. After a short modeling career, a handful of late-night television appearances, one Japanese airline commercial and many backwards death-defying roller-skating trips down the steep hills of San Francisco, Henry settled down and married his wife, Rochelle. Henry and Rochelle went on to have 3 children during their 10-year marriage, cut short by Rochelle’s untimely death on the 16th of April 1989, one day short of Henrie’s 35th birthday. After leaving the Bay Area, Henry attended LIFE East Bible College and eventually settled in Massachusetts where he turned his love of cooking into a career as a chef. Henry is predeceased by his wife Rochelle Washington and L.C. (Smitty) Smith---He is survived by his 4 beautiful children Satin-Deseree Michele, Fabianna Sari, Quinton-Lee McQueen and Devin Elijah, his brothers Fred, Rick, David Lawrence, sister Michele and his Mother, Mrs. Nellie Smith. Relatives and friends will be received on Saturday (Nov. 7th) from 11am until 12pm in the Spilker Funeral Home, 815 Washington St., Cape May where Henry's memorial ceremony for his family and closest friends will begin at 12pm. Restrictions are in place and masks and social distancing will be observed. For those who cannot physically attend the memorial ceremony it will be available via livestream by clicking on this link https://client.tribucast.com/tcid/90991853 on Saturday morning. The link will be active beginning at 11:45am.

Henrie (Misha) M. Washington Jr. Henrie McQueen Washington, 68, of Wilmington, North Carolina left this world to rest with the Lord on September 23, 2020 while living in Cape May, New Jersey. Henrie, known in his younger years as Misha, one... View Obituary & Service Information

The family of Henry Washington created this Life Tributes page to make it easy to share your memories.