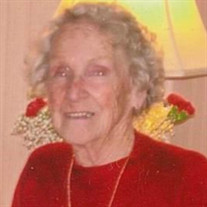 Helen E. Whomsley December 16, 1920 - March 17, 2022 Helen Whomsley reached the end of her long and happy earthly journey on March 17, 2022. She was 101. Helen was born Helen Euginia Phillips on December 16, 1920 – the year that the women were granted the constitutional right to vote, the final full year of the Woodrow Wilson administration and the year the Spanish Flu Pandemic of 1918 was finally over. Helen was born in Watertown, New York, the daughter of Lee A. and Pearl (Grappatte) Phillips, and spent formative years in Clayton, New York on the St. Lawrence River. Although in her early adulthood Helen would relocate to the (somewhat) warmer climes of New Jersey- Merchantville and then later Cape May – she would always retain a fondness for the Thousand Islands, to which she visited whenever possible. After arriving in New Jersey, Helen practiced as a registered nurse at Cooper Hospital in Camden, where she met the man who would become her husband – George Whomsley. Helen and George were married on April 27, 1944 at North Baptist Church in Camden and eventually made their home in Merchantville, NJ. After the passing of George in May 1967, Helen continued her nursing career and eventually become a member of the Pennsauken Visiting Nurses Association. Years after George’s passing, Helen met the man who would become her long-time companion, Edward McBride. Ed and Helen shared a love of golf and of Cape May, where they took up residence on Philadelphia Avenue. Helen could often be found at Avalon Golf Club, where she honed her skills as a golfer. With Ed’s passing in 1997, Helen continued to live on Philadelphia Avenue for several years, enjoying the company of friends and maintaining an independent and active life in Cape May as a supporter of Cape May MAC and a parishioner of Our Lady Star of the Sea Church, and continuing to drive around town into her 90s. When Helen decided that the “joys” of maintaining a home were not quite what they used to be, she moved to Victorian Towers near the Mall in Cape May. Helen loved her time at the Towers and her friends there. Eventually, when she realized that she would need some additional assistance, Helen –always very independent – made arrangements to move to Brookdale Senior Living in Cape May Court House, where she was happy to receive the visits of her dear friends and family. Helen’s passing is mourned – and her long life is celebrated – by the Whomsley, McBride, Haines and Joblin families, and by her dear friends who were a great source of joy to her. A funeral Mass will be held at 12:30 on Friday April 22, 2022 at Our Lady Star of the Sea, 525 Washington Street, Cape May, New Jersey. Interment will be at Lakeview Memorial Park, Cinnaminson, New Jersey the following day. In lieu of flowers, gifts may be made to: Cooper Hospital Foundation https://foundation.cooperhealth.org/ Our Lady Star of the Sea Church: http://www.ladystarofthesea.org/olss/Contact/ Cape May MAC: https://capemaymac.org/support/donate-to-mac/ Women’s Community Club of Cape May: www.womenscommunityclubofcapemay.org

The family of Helen Whomsley created this Life Tributes page to make it easy to share your memories.