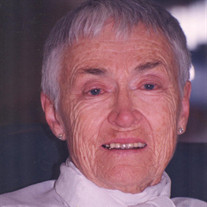 Helen Szymanowski - 97, of Cape May, passed away peacefully on December 29, 2016. Helen had been a resident of Cape May since 1998. Helen was born on December 22, 1919 to Nora and Frank Sokalski in the Vailsburg section of Newark and was the older sister to Alfred, who died in 2012. She attended the Sacred Heart Church in Irvington, graduated from Westside High School and continued to live in Newark until 1961, when she moved with her husband and children to Bayonne. In Bayonne, she and her husband were active in Mt Carmel Parish. She was a union waitress, working catered affairs primarily. Upon her move to Bayonne she worked at the Broadway Diner. She also volunteered as a homemaker and caregiver. Helen enjoyed being physically active: swimming at the Jersey City YM-YWCA and walking once or twice a day even past 90 years old. She was an avid reader and enjoyed attending theater in New York. She enjoyed traveling, especially with Elderhostel. When asked where she wanted her 85th birthday party, she enthusiastically chose Disney World. Helen was married for more than 50 years to Walter Szymanowski, who predeceased her by more than 20 years. Together they had 2 daughters, Barbara (and Thomas) Wozniak and Anne Berkery; 2 grandsons, Matthew Wozniak and Gregory Wozniak. She has 5 great-grandchildren, Megan, John, Maura, Walter and Drew Wozniak. Helen’s Mass of Christian Burial will be celebrated on Saturday (Jan. 21st) at 11am in St. John of God Church, 680 Town Bank Rd., N.Cape May where friends will be received from 10am – 11am. Interment is private and at a later date. In lieu of flowers, memorial contributions can be made to the Kosciuszko Foundation, online at https://www.thekf.org or a charity of your choice. Info and condolences: spilkerfuneralhome.com Although this website offers many options to send flowers, PLEASE observe the request of the family to send a memorial contribution instead to: the Kosciuszko Foundation or a charity of your choice.

Helen Szymanowski - 97, of Cape May, passed away peacefully on December 29, 2016. Helen had been a resident of Cape May since 1998. Helen was born on December 22, 1919 to Nora and Frank Sokalski in the Vailsburg section of Newark and was the... View Obituary & Service Information

The family of Helen Szymanowski created this Life Tributes page to make it easy to share your memories.

Helen Szymanowski - 97, of Cape May, passed away peacefully on...

Send flowers to the Szymanowski family.