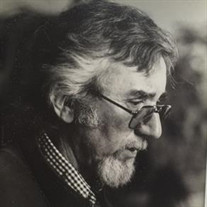 Harry Kulkowitz led an extraordinary life. He passed away on Tuesday, August 22, 2017. Born on November 2, 1924 to Morris and Sophie Kulkowitz, who had fled Eastern European anti-semitism, Harry was raised in a socially conscious community where he absorbed a commitment to helping people as well as a prodigious work ethic. Enlisting under age in the army to fight Hitler, Harry served his country both as aerial photographer and as a radio intercept operator under Patton, actually intercepting the first German message that presaged by hours the Battle of the Bulge. Photography was Harry’s passion. He was never without his camera. After his discharge from the army, Harry set up a portrait studio in New York. He also opened a luncheonette with his beloved sister, Sylvia. After moving with his family to Philadelphia, wife, Beena and their two children, Sigrid and Susan, and son, Mark born of Harry’s previous marriage to Inga, Harry worked as a picture framer which led to his creating the Kenmore Art Gallery. He did this without the usual pedigrees. Rather, trusting his inner intelligence and unquenchable passion, he built one of the most prestigious fine art galleries in Philadelphia. In 1975 Harry moved to Cape May. While playing poker with friends in the Carroll Villa Hotel, Harry mused, “If I could just get an awning on this porch, I could create a great restaurant, community meeting center and art gallery.” Thus, was born the Mad Batter Restaurant. With the Mad Batter, Harry and his partner, Vickie Seitchik, initiated what became the Cape May Restaurant Renaissance. Authentic, complicated, passionate, filled with an astonishing creativity and energy, Harry lived his life with people at its center. He loved being there for you—talking, encouraging, helping. A generous and loving family man and friend, Harry worked hard to make sure his family was provided for and did well in their lives. Over the years, so many people wrote to him, called him to say that he had deeply impacted their lives. Vickie’s son, Mark noted: “Most of what is expansive in my life, Harry had a hand in influencing.” On Harry’s wall is a photograph from award winning photographer Denis Finley, the Batter’s first breakfast chef. The inscription states: “Harry. Many years ago you gave me the greatest gift of my life, the ability to believe in myself.” Starting in 2004, Harry’s son, Mark accompanied in different years by daughters, Sigrid and Susan, grandchildren and friends (with a special shout out to Kathi) travelled with Harry to the Normandy town of Houseville on D Day, where D Day veteran Harry was feted, embraced, kissed by every woman in the town in their emotional and heartfelt gratitude. In France, Harry was knighted and awarded the French Legion of Honor. In 2014, Harry sat on the stage, alongside President Obama, who lauded this son of Jewish immigrant parents. Harry, we will miss you greatly. Harry is survived by his son Mark and wife Pam, their children Marta (Herbie), Kyle (Lia) and Tessa and great grandchildren, Nora and Anders: His daughter Sigrid, her husband Shaul and their sons Nadav, Kalil and Sigrid’s son Paul: His daughter Susan and her daughter Satya (Frank): His life partner, Vickie and her son, David and partner Tamara and son Mark and his husband Jon. Harry is predeceased by his beloved sister Sylvia Hecht and his ex-wife Beena Kulkowitz. A graveside service will be held on Thursday (Aug. 24th) at 5pm in the Cape May County Veteran’s Cemetery, Crest Haven Rd., Cape May Court House. In lieu of flowers, memorial contributions are suggested to a charity of your choice to help make the world a better place.

Harry Kulkowitz led an extraordinary life. He passed away on Tuesday, August 22, 2017. Born on November 2, 1924 to Morris and Sophie Kulkowitz, who had fled Eastern European anti-semitism, Harry was raised in a socially conscious community... View Obituary & Service Information

The family of Harry Kulkowitz created this Life Tributes page to make it easy to share your memories.

Harry Kulkowitz led an extraordinary life. He passed away on...