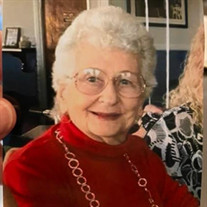 BEACHAM, Mary L. “Happy” – 84, of Cape May Point and more recently of North Cape May, passed away on Christmas morning, December 25, 2020. “Happy,” a nickname given to her by her mother when she was just a baby, was born on January 8, 1936 in the Mt. Airy Section of Philadelphia to Joseph and Mary McMenamin. Happy attended Germantown High School; moved to Cape May Point in 1953 with her mother and sister and graduated from Cape May High School in 1954. She later attended East Stroudsburg State Teachers College. Happy worked as a dental assistant in Wildwood. She also worked for various businesses on the Cape May Boardwalk including Morrow’s Nut House; was a housekeeper for a number of people in Cape May Point and Cape May, and worked at the Cape May Point General Store for a few summers. She was a member of The Point Civic Club for many years; vice president of the Episcopal Church of the Advent (ECW), Cape May and St. Peter’s Sea Episcopal Church, Cape May Point; a member of the VFW Auxiliary since 1970 holding various offices including chaplain for 20 years and president for 2 years; and was a member of the MOCA (Military Order of the Cooties Auxiliary). She also enjoyed bowling and was a member of a small league in Wildwood. She was a loyal Philadelphia Eagles fan. Happy is dearly missed and forever loved by her family which includes her daughter, Marjorie (Smith) Johnston (Robert) and son, James T. Smith, Sr. (Linda); two grandsons, Jimmie Smith and Brandon Smith; granddaughter, Lynn Johnston; great grandchildren, Hailey Rose Smith, Jesse James Smith and Benjamin Hays; her sister, Joan Flanagan and brother-in-law, John. Memorial services will take place at a later date. Interment will take place in the Cape May County Veterans Cemetery. In lieu of flowers, memorial contributions are suggested to the Cape May County Animal Shelter, 110 Shelter Rd., Cape May Court House, NJ 08210.

The family of Happy Beacham created this Life Tributes page to make it easy to share your memories.