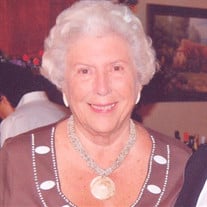 Holmstrup MacLeod, Gloria - 92, of Cape May, NJ passed away on April 10, 2017. Gloria was born to Alan and Anna (Marko) Lyster on July 31, 1924 in Philadelphia, PA. After graduating from Philadelphia High School she was employed by Pope and Talbot Steam Ship Company, where one of the Captains would always bring Gloria a box of candy when his ship pulled in. One day, he had his First Mate, Kenneth Holmstrup, a Kings Point Academy graduate and veteran Merchant Marine, make the delivery. It was the beginning of a love affair that would last 34 years. The Holmstrups were married in 1951 and moved to Cape May where they were active socially and politically. With a common love of antiques and colonial craftsmanship, they renovated the Isaac Smith home on Old Shore Road and built and operated the Cape May Forge, the local “go-to” spot for lampshades, antiques, and brass polishing. In 1961 Ken was elected to the Cape May County Board of Chosen Freeholders and together they embarked on a 12-year political career of service to the county. After Ken’s death in 1985, Gloria moved back to Cape May where she was active as a member of the Corinthian Yacht Club, running the gift shop, serving on the race committee and even serving as “Mommadore” alongside several Commodores. She was an enthusiastic volunteer and supporter of Historic Cold Spring Village and became a member of the Friends of Historic Cold Spring Village at its inception. Gloria will be missed by daughter Lizabeth Holmstrup Shay, son Kenneth Alan and his wife Jana Holmstrup, grandson Kenneth Shay, and granddaughters Kendall Madison and Olivia Antoinette Shay. She will also be missed by numerous family members across the country. Gloria is preceded in death by John N. MacLeod, former Cape May County Agricultural Officer, whom she married in 1998. Together with her band of close friends, Gloria enjoyed summers at the Beach Club, dinners at the Lobster House, and especially Friday nights at the Yacht Club where they could always be found around their specially reserved table. As she always said – “I’ve had a full and wonderful life!” Gloria’s memorial ceremony will take place on Tuesday (April 18th) at 11am in the Spilker Funeral Home, 815 Washington St., Cape May where friends will be received from 10am to 11am. Interment will be private and at a later date. In lieu of flowers, please send donations to Historic Cold Spring Village or the Naval Air Station Wildwood Aviation Museum.

Holmstrup MacLeod, Gloria - 92, of Cape May, NJ passed away on April 10, 2017. Gloria was born to Alan and Anna (Marko) Lyster on July 31, 1924 in Philadelphia, PA. After graduating from Philadelphia High School she was employed by Pope and... View Obituary & Service Information

The family of Gloria Holmstrup MacLeod created this Life Tributes page to make it easy to share your memories.