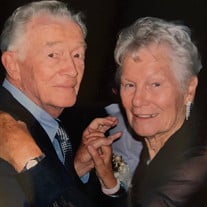 GLASER (nee Douglass), Virginia D. “Ginny” – 91, of Cape May, in the comfort of her home, followed her husband of 69 years, William “Bill” Glaser into eternal life on Tuesday, November 19, 2019, just two days after Bill’s passing. Ginny was the devoted mother of four children, Capt. William D. Glaser (Annamarie), Susan Tracey (Michael), Bonnie Cappelluti (Pete) and Lori Arthur (Bob). She is also survived by five grandchildren, four great grandchildren; one brother, Capt. Donald M. Douglass (Joan) and her sister-in-law, Phyliss Douglass. She is predeceased by her brother, Capt. George Douglass. Ginny was born on July 18, 1928 in Lewes, DE to the late Capt. Donald and Almira Douglass. She graduated from Collingswood High School in 1946 and later graduated as a Registered Nurse from Abington Memorial in 1949. She began her nursing career at Woodbury Memorial Hospital and later worked at Crestview Nursing Home and then Pine Crest Nursing until her more recent employment at South Cape Nursing Home where she retired. As a part of her nursing career, she was very proud to have served on a medical mission to El Salvador. Throughout her life her devotion to her family was always first and foremost. In conjunction with her husband Bill’s memorial ceremony, Ginny’s memorial ceremony to celebrate and honor their lives will be held on December 21, 2019 (Saturday) at 11am in the Cape Island Baptist Church, 115 Gurney St., Cape May where friends will be received by Bill and Ginny’s family from 10am until 10:50am. In lieu of flowers, donations in Ginny’s memory can be made to a charity of your choice. (Spilker Funeral Home, Cape May) info and condolences: spilkerfuneralhome.com

The family of Ginny Glaser created this Life Tributes page to make it easy to share your memories.