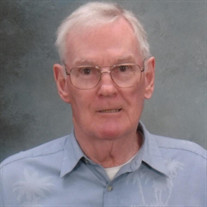 WILSEY, GEORGE FRANKLIN – 85, of Melbourne, FL died on August 13, 2020 at Holmes Regional Hospital in Melbourne, FL. George was born at home in Sea Isle City, NJ on Jan. 23, 1935 to Christina Luella (nee Geisen) & Adolph Cornelius Wilsey. He was the 7th of 8 children. George attended grammar school in Sea Isle City; Graduated Ocean City High School in 1953 and attended Rutgers School of Engineering in New Brunswick, NJ. George left college to join the US Army and served in Okinawa, Japan from 1954-1956. Upon returning home from the Army, George worked at Creighton's Trading Post in Sea Isle City, NJ and then joined NJ Bell Telephone in 1960 where he continued to work as a transmission testman until he retired in 1992. After retirement, George moved to Melbourne, Florida to be close to his children and enjoy the warm climate. George was married to Sally Lovejoy, also of Sea Isle City, from 1961 until 1976. He is survived by his children, David G. Wilsey (Caroline), Melbourne, FL, Douglas C. Wilsey, Satellite Beach FL, Dianne E. Wilsey, Melbourne, FL and his granddaughter Sally M. Wilsey, Melbourne, FL. He is predeceased by his brothers John; Alfred “Ace”; William “Bill”; Richard “Dick”; and sisters Mary Gorman; Nora Clark and Ruth DeHaven. He is also survived by numerous nieces, nephews and extended family who loved him very much. Graveside burial services will be held on Tuesday (Aug. 25th) at 11am in the Seaville United Methodist Cemetery in Seaville, NJ. For those who are unable to attend, George’s ceremony will be recorded and can be found shortly after his ceremony on his webpage tribute wall through www.spilkerfuneralhome.com Celebrations of George’s Life will be planned for sometime during the summer of 2021 in both Cape May, NJ and Melbourne, FL for all of George’s friends and family. In lieu of flowers, donations may be made to Florida Veterans Foundation, https://helpflvets.org (Spilker Funeral Home, Cape May)

The family of George Wilsey created this Life Tributes page to make it easy to share your memories.