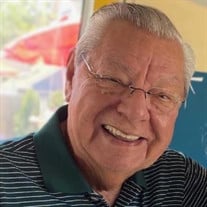 KUHAR, George J. – 88, of Cape May City, passed away peacefully on Saturday, September 18, 2021. George was born May 23, 1933 in the Fishtown Section of Philadelphia, PA. A man of honor, George proudly enlisted in the United States Army and served during the Korean War. He was stationed in Germany and was honorably discharged. George was a proud member of the Philadelphia Police Department, retiring as a homicide detective in 1980 after 25 years of service. He continued his career as a security supervisor at the Trump Plaza in Atlantic City, NJ. He was a member of the Knights of Columbus, Resurrection Council in Marmora. Prior to moving to Cape May, George resided in Beesley’s Point, NJ. George truly loved everything about Cape May and enjoyed his winter vacations in Venice, FL. He was predeceased by his loving wife, Clare (nee Spross), who passed away in 2002. He was also predeceased by his seven siblings, Adam, Anne, Theresa, Marie, Elizabeth, Paul and Madeline. George is dearly missed and forever loved by his family which includes his children, Clare Haack (Thomas) and Gerald Kuhar (Jaclyn); grandchildren, Joseph (Amy), Sarah, Dr. Nicole (Christopher), Carson and Gabrielle; great grandsons, Joey and Gabe. George also leaves behind his beloved fiancée, Joan Whelan and her dear family. He is also survived by many nieces and nephews. George’s viewing will be offered on Monday (Sept. 27th) from 12:30pm until 1:20pm in Our Lady Star of the Sea Church, 525 Washington St., Cape May where his Mass of Christian Burial will be celebrated at 1:30pm. Interment with military honors will follow Mass in Cape May County Veterans Cem. In lieu of flowers, memorial contributions are suggested to Tunnels to Towers Foundation, online at www.t2t.org (Spilker Funeral Home, Cape May) info and condolences: spilkerfuneralhome.com

KUHAR, George J. &#8211; 88, of Cape May City, passed away peacefully on Saturday, September 18, 2021. George was born May 23, 1933 in the Fishtown Section of Philadelphia, PA. A man of honor, George proudly enlisted in the United States Army... View Obituary & Service Information

The family of George Kuhar created this Life Tributes page to make it easy to share your memories.