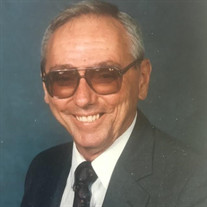 HOLDEN, George R. - 84, of Cape May, NJ joined his parents Florence and George Holden, sister Patricia Halbruner (nee Holden) and son Ryan in Heaven on July 27, 2018. He will be missed by his high school sweetheart and wife of 64 years, Ginny Holden (nee Kreck) along with his children Amy (Tom) Kennedy (nee Holden), Patrick (Anissa) Holden, Michael (Sharon) Holden, G. Scott Holden and Jennifer Smith (nee Holden); 12 grandchildren Amber, Rebecca (and Mary), Lauren, Michael, Patrick, Grace, Molly, Gregory, Lindsay, Ivy, Piper and Toby; his sister-in-law Carol Ann; nieces and nephews, friends and former players. George was born in Philadelphia but Cape May was his home. He attended Old Cape May High School where he played football (quarterback), baseball (catcher), basketball (guard) and track. He graduated in 1952. After high school, he also played for the Cape May Rockets Semi-Professional Football Team (quarterback). After taking courses at West Chester University and LaSalle University and working many odd jobs, George joined the Army from 1954-1956. Following his service in the Army, George continued his college education and eventually earned a degree from Rutgers University. It was then that George began his long and distinguished career as a math teacher and basketball coach. Basketball became one of his passions. He was known for his old school mentality and tough discipline. Three of the schools where he taught and coached were Brooklawn Middle School, Haddon Heights High School and Lower Cape May Regional High School. Although many former players and students say how George touched their lives, it is important for them to know that they held a special place in his heart and brought him such joy and tremendous pride. George had many other passions. He was interested in history, wrote poetry, enjoyed nature and traveled. George's unwavering love, commitment and devotion to his family along with his love of the Blessed Mother were truly the essence of who George was. The Holden Family would like to thank the many friends and family members who have supported them during this time, especially the staff at Victoria Manor and Holy Redeemer. George’s viewing will be held on Wednesday evening from 6pm – 8pm in the Spilker Funeral Home, 815 Washington St., Cape May. An additional viewing will be offered on Thursday in Our Lady Star of the Sea Church, 525 Washington St., Cape May from 12:15pm until 1:15pm with Mass of Christian Burial to begin at 1:30pm. Interment will follow in St. Mary’s Cem., Cape May. In lieu of flowers, for convenience and acknowledgment purposes, memorial contributions are suggested through “In Memory Of” online at www.inmemoryof-memorial.org/george-holden to benefit the Scleroderma Foundation.

HOLDEN, George R. - 84, of Cape May, NJ joined his parents Florence and George Holden, sister Patricia Halbruner (nee Holden) and son Ryan in Heaven on July 27, 2018. He will be missed by his high school sweetheart and wife of 64 years, Ginny... View Obituary & Service Information

The family of George Holden created this Life Tributes page to make it easy to share your memories.