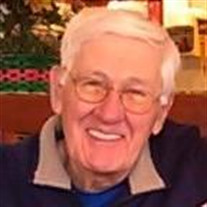 GRAY, George Edwin – 88, of Cape May and formerly of Media, PA passed away quietly on Saturday, October 29, 2016. George had been diagnosed with mesothelioma earlier in the month, which took him quickly. George was a family man who led a deeply blessed life, starting out life in 1928, as a farm boy in Croswell, Michigan, with a loving and hardworking family. He attended Croswell High School, graduating in 1947, as a top football player and the President of his class. In 1951, George graduated with a Bachelor of Science in Engineering from Michigan State University. With his degree in hand, in 1951, he then joined the United States Army and later, the Army Reserves, honorably serving until 1959. George married Muriel Elaine Borrusch in 1956. They produced two daughters, Kelly Ann Gray in 1962 and Lisa Marie Gray in 1964. George joined United Engineers in 1954 and stayed there for a long run of 43 years, retiring in 1997. He then stoked his entrepreneurial spirit and started Park Properties LLC, a residential construction company, building multiple homes in Cape May. George loved his family deeply which was the centerpiece of his life. He was known for his deep consideration and thoughtfulness for others, his willingness to assist with a smile on his face putting others priorities before his own, his intelligence, and his exceptional loyalty. He was pre-deceased by his mother, Fern Francis Gray and his father, Frank Gray, along with his four siblings, Beth Gray Decker, Shirley Gray Holcomb, Connie Gray Miller and Charles Gray. George is dearly missed by his loving family which includes his wife of 60 years, Muriel Gray; his daughters, Lisa Marie Gray and Kelly Ann Gray Moffett (husband Robert); grandsons, Joseph Gray Dignazio and Anthony Gray Dignazio. His grandson, Joseph, wrote a piece which summarizes George wonderfully: “RIP To the most impressive man I’ve met yet…athlete, scholar, business man, international engineer, husband of 60 years, and a man of the highest character I’ve ever encountered. I hope to follow in your footsteps and I will carry on the Gray legacy to make you proud of the man I am trying to become.” Relatives and friends will be received on Saturday from 12pm to 1pm in the Spilker Funeral Home, 815 Washington Street, Cape May with George’s memorial ceremony beginning at 1pm. Following the ceremony a luncheon will be offered next door for friends and family at the Washington Inn Restaurant. In lieu of flowers, donations are suggested to YesUCan online at: www.yesucanusa.org and select "Donations in Memory of George Gray, a Proud Supporter of Yes U Can.” - Although this website offers many options to send flowers, PLEASE observe the request of the family to send a memorial contribution instead to: YesUCan online at: www.yesucanusa.org and select "Donations in Memory of George Gray, a Proud Supporter of Yes U Can.”

GRAY, George Edwin &#8211; 88, of Cape May and formerly of Media, PA passed away quietly on Saturday, October 29, 2016. George had been diagnosed with mesothelioma earlier in the month, which took him quickly. George was a family man who led... View Obituary & Service Information

The family of George E. Gray created this Life Tributes page to make it easy to share your memories.

Send flowers to the Gray family.