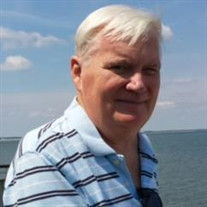 CARPENTER, George John - 70, of North Cape May died peacefully on May 17, 2017, surrounded by his loving family. Born at Margaret Mace Hospital in North Wildwood on March 5, 1947, to the late Earl and Ruth Carpenter, George was raised in Cape May and later, Erma. He graduated from Lower Cape May Regional High School, Class of 1965. In the summer of 1966 he met his best friend and love of his life, Adele, in Cape May. They wed on June 15, 1968, in Philadelphia, PA. George was drafted into the U.S. Army in 1968, and proudly served his country in the Vietnam War; he achieved the rank of Specialist 5. During his service, he received the following medals: National Defense Service, Vietnam Campaign with DVC 60, 2 O/S bars, Good Conduct, Vietnam Service, and Expert Rifle. He was honorably discharged in 1970, and was the recipient of the Distinguished Medal of Honor for his service in the Vietnam War. Upon his return, he and Adele settled in Cape May, and later North Cape May, where they raised their beautiful family. He worked in construction for many years until he found his calling when, in 1976, he was employed at Cold Spring Presbyterian Cemetery. His career there would span 40 years before retiring as the Manager and Superintendent of the cemetery. During his tenure at the historic cemetery, his proudest moment was when, in 2011, he was interviewed by the Press of Atlantic City regarding his life-long work for the cemetery; consoling grieving families and tending to the final resting place of their loved ones. When asked how he managed to take care of the over 158-acre cemetery he once joked, “You can’t take a day off. The Grim Reaper never takes a day off.” George saw death as “part of the fabric of living. The joy of life is tempered by the sadness and grief of dying, and the two are intertwined.” In addition to the cemetery, he was a self-taught chef, and worked at many upscale restaurants in Cape May and Avalon. He was involved with the community as a Pee-Wee Football coach for many years. He was a member and Past Worshipful Master of the Cape Island Masonic Lodge No. 30, F & AM. He was also a gifted artist whose work was displayed and sold throughout Cape May County. He was predeceased by his parents, Earl and Ruth and his brother, Stephen. George is survived by the love of his life, Adele (nee Doyle), his three daughters, Laura (James), Colleen (Jeffrey), Christin (Vincent) and six grandchildren: Jacqueline, Zachary, Catharine, Julia, Eden and Jack; his brother, Michael, sisters, Susan and Rebecca. He will be dearly missed by his many nieces and nephews, great-nieces and great-nephews. George’s funeral service will be held on Tuesday (May 23rd) at 11:30am in the Cold Spring Presbyterian Church (“Old Brick”), 780 Seashore Rd., Cold Spring where there will be a viewing from 10am until 11:20am. Interment with military honors will follow in the Cold Spring Cemetery. In lieu of flowers, a memorial donation may be made in George’s name directly to the ongoing preservation of the Veterans’ section of the Cold Spring Presbyterian Cemetery (Attn.: Mr. Kevin Beare), 780 Seashore Road, Cape May, NJ 08204.

CARPENTER, George John - 70, of North Cape May died peacefully on May 17, 2017, surrounded by his loving family. Born at Margaret Mace Hospital in North Wildwood on March 5, 1947, to the late Earl and Ruth Carpenter, George was raised in Cape... View Obituary & Service Information

The family of George J. Carpenter created this Life Tributes page to make it easy to share your memories.