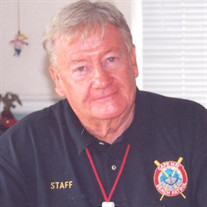 LADD, Eugene Francis “Gene”- 88, of Cape May, passed away peacefully in the comfort of his home surrounded by his family on March 30, 2017. Born on September 16, 1928 in Chicago, IL, Gene served in the U.S. Army in World War II and the Korean War as a paratrooper. Gene attended the University of Illinois and in 1954, he relocated to Cape May to serve in the United States Coast Guard. Cape May is where he met his wife Peggy and they married in 1956. While in the Coast Guard, Gene coached the Coast Guard “Bears” football and basketball teams. After retiring from USCG in 1973, Gene found a new home a few years later with the Cape May Beach Patrol as an administrator at the lifeguard headquarters. Gene was known as the “voice of the beach patrol,” making the morning announcements along the promenade for 21 years until retiring in 2010. Gene was also a member of the Cape Island Masonic Lodge. Gene enjoyed many trips to Florida with Peggy, loved golfing, tinkering in his workshop, watching old movies and watching his grandchildren’s soccer and basketball games. Gene will be sadly missed by his loving family which includes his wife of 61 years, Margaret “Peggy” (nee Sharp); his son, Bruce (Susan) Ladd of Marmora. “Poppy” will also be missed by his grandchildren, Ryan and Kelsey Ladd of Marmora. Relatives and friends are invited to Gene’s viewing from 10am – 11am on Wednesday (April 5th) in the Spilker Funeral Home, 815 Washington St., Cape May which will be followed by a time of sharing thoughts and memories offered by family and friends beginning at 11am. Interment with military honors will follow in the Cold Spring Cemetery, Lower Twp. Our family would like to thank the Cape May Fire Department and Cape May Police Department. In lieu of flowers, memorial contributions can be made in Gene’s memory to: Holy Redeemer Hospice, 1801 Rte 9 North, Swainton, NJ 08210 or Cape May Volunteer Fire Department, PO Box 375, Cape May NJ 08204. Although this website offers many options to send flowers, PLEASE OBSERVE the request of the family to consider a memorial contribution instead to: Holy Redeemer Hospice, 1801 Rte 9 North, Swainton, NJ 08210 or Cape May Volunteer Fire Department, PO Box 375, Cape May NJ 08204.

The family of Gene Ladd created this Life Tributes page to make it easy to share your memories.

LADD, Eugene Francis “Gene”- 88, of Cape May, passed away peacefully...

Send flowers to the Ladd family.