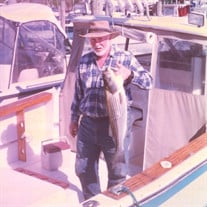 KELLY, Eugene “Gene” – 74, of West Cape May and formerly of Collingdale, PA passed away peacefully on Sunday, June 29, 2014. Gene graduated from Monsignor Bonner High School, Drexel Hill, PA (Class of ‘57). He was later employed as a marine machinist for the Philadelphia Naval Shipyard for 31 years before retiring in 1995. He was devoted to his Catholic Faith and was a member of Our Lady Star of the Sea Church, Cape May. Gene was a devoted father and grandfather. He enjoyed fishing and shared his love of fishing with his children and grandchildren. He also enjoyed gardening and was known for delicious jersey tomatoes. A devoted husband of over 45 years, He was predeceased by his wife, Patricia in 2007. Gene will be dearly missed by his loving family which includes his four children, William (and Sharon) Kelly, Patricia (and James) Cashin, Theresa (and Bruce) Olexa and Eugene Kelly; brother, Joseph (and Peg) Kelly; eight grandchildren, Steven, Bruce, Tom, Jamie, Chris, Billy, Kyle and Patrick; one great granddaughter, Alexis. Mass of Christian Burial will be celebrated on Saturday (July 5th) at 10AM in Our Lady Star of the Sea Church, 525 Washington St., Cape May where friends will be received from 9AM – 10AM. Entombment will follow in the St. Mary’s Cemetery Mausoleum, Lower Township. In lieu of flowers, memorial contributions are suggested to: Love of Linda, PO Box 1053, Wildwood, NJ 08260.

The family of Gene Kelly created this Life Tributes page to make it easy to share your memories.

Send flowers to the Kelly family.