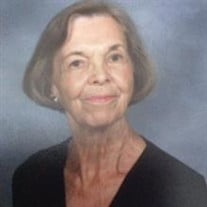 Submitted by Gayle's family... Gayle Kerns (Armstrong Thompson), 87, died July 17, 2016 peacefully in her sleep, in Cape May Court House, NJ. She was small (or petite, as she would say) but determined. She was tested often throughout her life, but it was absolutely impossible to get her either to change her mind, or give up. This quality was both admirable and infuriating. She was born on September 1,1928, in Fairplay Colorado, a small town in the Rockies where her family were ranchers. After losing first her mother, then her grandmother, she moved east to Mt Airy, Pa. at the age of 13 to live with her aunt and uncle, Zoe and William Miller. But she always kept Fairplay in her heart. She spent many happy summers in Ocean City, NJ as a teenager, working at the Flanders Hotel and the Chatterbox. And ever since, being at the beach was one of her greatest joys. After high school she worked at Bonwit Tellers in Philadelphia, and then met and married Richard Arthur Kerns 3rd in 1949. She was busy raising her three children, while the family lived in various suburbs of Philadelphia. She was active in the Girl Scouts, serving as a troop leader. Her great-granddaughter is now a fourth generation Girl Scout. Once her children were in school she resumed working. She was a dedicated administrative secretary at Penn State University. In 1975 she married Jack Thompson, and moved to Mays Landing, NJ. She continued working, as a legal secretary first in the Prosecutor’s office in Atlantic City, and then in a private law office. Together they traveled the world. Gayle still spent summer days at the beach in Ocean City, and did manage to maintain her tan. She now was building drip castles for the grandchildren. In 1997 she moved to The Woodlands, TX where she had a better social life than her children, making many friends, taking short trips, and working part time in the library at the local community college. She was a lifelong Democrat, and was able to become more politically active in her retirement, going to meetings and stumping for her candidate. She was rather proud of having her car egged when she and a pal were door knocking for Obama. She moved back to New Jersey in her last months, and although in failing health, she still refused to give up, toughing it out until the end. She is survived by her children, Zoe Bleck (Bob), of Woodglen, NJ, MaryEllin Santiago (Raymond), of Coral Cables, FL, Richard A. Kerns IV (Patricia), of St. Simons Island, GA, seven grandchildren, Abby, Emily, Zoe, Kristen, Lisa, Richard V, Devon, and four great-grandchildren, Caroline, Clara, Max, and Peyton. She valued education and said that her proudest achievement was that all of her children and grand-children graduated from college. Gayle’s memorial service will be held privately. Memorial contributions to Atlantic County Library Foundation 40 Farragut Ave Mays Landing 08330 Although this website offers many options to send flowers, PLEASE observe the request of Gayle's family to send a memorial contribution instead to the Atlantic County Library Foundation (address above).

Submitted by Gayle's family... Gayle Kerns (Armstrong Thompson), 87, died July 17, 2016 peacefully in her sleep, in Cape May Court House, NJ. She was small (or petite, as she would say) but determined. She was tested often throughout her... View Obituary & Service Information

The family of Gayle Kerns created this Life Tributes page to make it easy to share your memories.

Send flowers to the Kerns family.