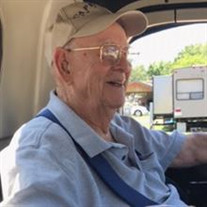 REEVES, Gail A. – 85, lifelong resident of Cape May, passed away peacefully on Sunday, September 17, 2017 at his home. He graduated from Cape May High School in 1950. A man of honor, Gail served in the United States Navy during the Korean War. Upon returning home from serving his country, Gail began working on the family farm and shortly thereafter he gained employment with the State of New Jersey as a bridge operator working on various bridges from Atlantic City south to the Cape May Canal Bridge; retiring as the Chief Bridge Operator of the George Redding Bridge. While working for the State of New Jersey, Gail always held fast to his family roots as he and his brother George continued to farm their land and ran the Broadway Farm Market in West Cape May. In the early 1970s Gail had the idea to develop a property of his into a campground which is now known as The Depot Travel Park located in West Cape May, a business which his son and grandsons proudly continue to manage. He was an honorary member of the West Cape May Volunteer Fire Co. Always a passion of Gail’s, he continued farming well into his retirement years always keeping the freezer filled with beans. He also enjoyed old tractors, old trucks, travelling and visits to Disney World. He is predeceased by his wife of 50 years, Elizabeth and more recently his wife, Gail Ann, as well as his granddaughter, Becky Murphy and brothers, Clement and Leroy Reeves. Gail is dearly missed by his family which includes his daughter, Sue (and Rick) Murphy; son, Glen (and Barbara) Reeves; brother, George (and Doris) Reeves; three grandchildren, Betsy, Adam (and Ashtin) and Aaron; three great grandchildren, Joey, Abigail and Addison. Gail’s funeral service will be held on Friday (Sept. 22nd) at 10:30am in the Spilker Funeral Home, 815 Washington St., Cape May where there will be a viewing from 9:30am until 10:30am. Interment will follow in the Cold Spring Cem., Lower Twp. In lieu of flowers, memorial contributions may be made to the West Cape May Volunteer Fire Co., PO Box 533, Cape May, NJ 08204.

REEVES, Gail A. &#8211; 85, lifelong resident of Cape May, passed away peacefully on Sunday, September 17, 2017 at his home. He graduated from Cape May High School in 1950. A man of honor, Gail served in the United States Navy during the Korean... View Obituary & Service Information

The family of Gail A. Reeves created this Life Tributes page to make it easy to share your memories.