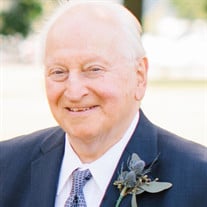 Frank Bradley Capone, Frank B. Capone, Frank Capone, Frank, Husband, Dad, Papa…. He was our Rock. Frank Bradley Capone was born in Philadelphia, PA, October 11, 1934 to Ethel Susan Brua and Americus Capone. He went to heaven August 6, 2019. He began his life with the Lord at St. Simeon Episcopal Church in Philadelphia where three generations before him worshiped. He had perfect attendance in Sunday School for eleven (11) years, was a member of the boys choir, was an acolyte and later a Eucharistic minister serving more than sixty years. Frank also coached the basketball team and ran dances for the church. After graduating from Northeast All Boys High, Frank found his calling in the real estate business. He became a Real Estate Broker and recently celebrated sixty years in the profession. His contributions to the REALTORS were many as he worked with the Standard forms committee for thirty years making Pennsylvania first in the nation to have one form throughout the state. As President of the Pennsylvanian Association of Realtors he traveled throughout the state speaking to members regarding Legal Liability. Frank was also a prominent lecturer and teacher regarding real estate. --------- This email from Dominic Cardone gives some insight as to the man Frank was. Dear All, My heart is so deeply broken. It has taken me a day to even be able to post this. I keep alternating between crying and laughing as I remember my friend and mentor Frank Capone. He was like a father to me. Actually he reminded me (as I often told him) of my own father who passed when I was only 19 years old. He used to refer to us as "Capone and Cardone", saying we would make you an offer you can't refuse. We would drive together to PAR Standard forms meetings laddened with his gifts of Italian bread for staff and others. Yes, Guy, I remember well his Coronation, and Jim his "9 D's" (90's) will remain the ultimate PAR trivia question. Even I cannot remember all 9. Yes, Kim, he asked me to be "short" with my speech. (Look who's talking.) He loved telling so many stories of his life experiences. Of how he was RFK's personal driver for a day in the 1969 campaign shortly before his tragic assassination. Of how he and Barbara discovered first hand the missing piece of Frank's family genealogy meeting by chance his Amish ancestor's cousin's cousin in Strasburg.(Len, perhaps you can fill us in.) Frank was so full of LOVE and deep spiritual faith. He will be sorely missed, but his life is an inspiration to all of us. His life will live on in his family and friends, and in all those he touched. His life will live on in the legacy of PAR. I hold so much more in my heart. Thank you all for you continued friendships and love. Dominic -------- Frank married Barbara on July 2, 1971. Joining them in this union were their children; Michael (Frank's son) and Andrea and Dan (Barbara's children). This July they celebrated their 48th wedding anniversary, and despite his illness and inability to get around, he found a way to give Barbara 48 white roses. Together Frank and Barbara owned and operated EAGLE REALTORS in Ridley Township, Delaware County, PA for twenty three years. The business was often a vehicle to bring Christ into the lives of others. It was his dream to live at the seashore overlooking the ocean. In 1976 Frank and Barbara purchased a property in Anglesea, N. Wildwood, NJ. There he got to watch the sun and moon rise while sitting on his patio for forty one years. As many of you know, he was an avid photographer, and the view from this vantage was taken on many, many occasions. Things that Frank liked. Food. He enjoyed the fellowship and friendship that came with serving those around him sumptuous, abundant fare. Jokes. Frank could tell a story and make those around him laugh heartily. He enjoyed puns and printing out jokes that he could read with others listening. Our laughter made him happy. Cars. He appreciated fine automobiles, owning a few himself. Washing his car was his way of relaxing. Wheel of Fortune game show. He called it the "Vanna Show" and tuned in every night. We're not sure if it was the game he enjoyed more or Vanna White! Giving. Frank was a giver. He bestowed gifts to friends and family. His greatest gifts were of his time. Whatever, the problem or task, personal or business, he gave his time unselfishly. Love. Frank loved God, his family and friends. The most important thing in his life was his love of God. In his words, "he moved from "Believing" to "Trusting" God and his life was changed forever. His final wishes written in a "Memorandum Regarding my Funeral" were "CELEBRATION Following the service…, it would be nice to celebrate the wonderful life I have had with all of my loved ones, where good food, fond memories and humor being the theme." Relatives and friends will be received on Friday (Aug. 16th) from 10am until 10:50am in St. Simeon’s By the Sea Church, 2502 Central Ave., N. Wildwood, NJ where Frank’s memorial ceremony will follow and begin at 11am. Interment of his ashes will be in the church's memorial garden. In lieu of flowers, memorial contributions are suggested to St. Simeon's Church or to Patrick's Boathouse, 213 Earlington Rd., Havertown PA, 19083. (Spilker Funeral Home, Cape May) info and condolences: spilkerfuneralhome.com

The family of Frank B. Capone created this Life Tributes page to make it easy to share your memories.