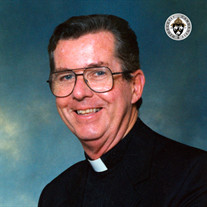 Reverend William F. Ryan - age 83 years, of Cherry Hill, NJ, a Roman Catholic Priest in the Diocese of Camden, returned home to the Lord on Saturday, September 21, 2019. Father Ryan was born in Philadelphia in 1936, the second of four children to Catherine (née Delaney) and William Ryan. He was a graduate of LaSalle High School in Philadelphia and later graduated with a Master’s Degree from Villanova University. Father Ryan was ordained at the Cathedral of the Immaculate Conception in Camden, NJ in 1962. During his 57 years as a priest, Father Ryan served in several parishes across southern New Jersey and was Pastor at Annunciation (1990-2002) in Bellmawr, NJ and at St. Raymond (2002-2003) in Villas, NJ. Father Ryan also taught at Holy Spirit High School in Absecon, St. Joseph’s High School in Hammonton and was Vice-Principal at Wildwood Catholic High School in the early 1980’s. Father Ryan was a proud priest and dedicated to serving his parishioners, teaching his students, and preaching - both in and out of the pulpit. He enjoyed good discussion and debate about matters spiritual and otherwise. Father Ryan also enjoyed a good meal, a good laugh and was grateful for happy times spent with family and many wonderful parishioners and students who befriended him over the years. Along with his parents, Father Ryan is also predeceased by his sister Jane Dietrich, brother-in-law Gerard Dietrich, and brother John F. Ryan. He is survived by his sister Sister Dolorine Marie Ryan, IHM. He is also survived by nieces Mary Ellen Dietrich, Anita (Andy) Lobley, Roseanne (Joe) Poston, and Michelle (Thom) Melcher and numerous other nieces and nephews. Mass of Christian Burial will be celebrated on Wednesday, September 25 at 11:00 a.m. in St. Joachim Parish Annunciation Church, 601 W. Browning Road, Bellmawr, NJ. Family and friends are invited for visitation in the church and prior to Mass from 10:00 a.m. to 10:45 a.m. Interment will be private. (Spilker Funeral Home, Cape May) info and condolences: spilkerfuneralhome.com

Reverend William F. Ryan - age 83 years, of Cherry Hill, NJ, a Roman Catholic Priest in the Diocese of Camden, returned home to the Lord on Saturday, September 21, 2019. Father Ryan was born in Philadelphia in 1936, the second of four children... View Obituary & Service Information

The family of Fr. Bill Ryan created this Life Tributes page to make it easy to share your memories.