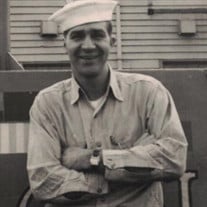 Floyd B. Brown, 91, of Cape May, passed away on November 1, 2018. Born on July 3, 1927 in a house on Pearl Avenue in West Cape May, to Henry and Pauline (nee Yentzer) Brown. He leaves behind his devoted wife of over 71 years, Irma (nee Playford); his loyal son, Allen R. Brown of West Cape May, as well as many nieces, nephews and friends. Floyd played football for Cape May High School, graduated in 1945, and went on to become a decorated veteran, serving two tours with the Navy Seabees. He met Irma roller-skating at West Cape May Park and a few days after her 18th birthday they married so they could be together in California while Floyd was in training. He worked at the Magnesite Plant before his 2nd tour and when that ended, he worked at Wentz’s Texaco on Sunset Blvd., eventually spending his weekends building the Country Garage in West Cape May from the ground up. He opened for business on April 1, 1965 and for over 50 years Floyd was The Boss, in the shop every day, taking care of his many loyal customers. Floyd was a self-made man who could fix anything, build anything, grow anything and take care of everybody while doing it. Smart, generous and loyal, he had many lifelong friendships and many people near and far feel they’ve lost a second father. All who knew Floyd Brown will remember an honest, dependable, and humble man, who never hesitated to offer whatever help he could if someone needed it. Cape May has lost a native son it can never replace and he is going to be sorely missed. Relatives and friends will be received on Friday (Nov. 9th) from 9:30am until 11am in the Spilker Funeral Home, Cape May where a time of sharing thoughts and memories will be offered by family and friends to honor Floyd beginning at 11am. Interment with military honors will follow in Tabernacle Cemetery, Lower Township. Memorial contributions are suggested to Family Promise, 505 Town Bank Rd., N. Cape May, NJ 08204 or online at www.familypromisecmc.org Info and condolences: www.spilkerfuneralhome.com

Floyd B. Brown, 91, of Cape May, passed away on November 1, 2018. Born on July 3, 1927 in a house on Pearl Avenue in West Cape May, to Henry and Pauline (nee Yentzer) Brown. He leaves behind his devoted wife of over 71 years, Irma (nee Playford);... View Obituary & Service Information

The family of Floyd Brown created this Life Tributes page to make it easy to share your memories.

Send flowers to the Brown family.