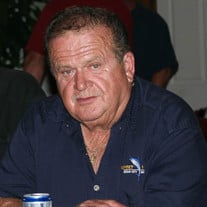 ROBINSON, Edward F. – 72, of Cape May and Jupiter, FL passed away suddenly on Monday, July 21, 2014 while in Jupiter. Ed graduated from Northeast Catholic H.S., Class of 1959. He was a United States Marine Corps Veteran. Thereafter, Ed began, and was proud of, his 25 year career as a Philadelphia Police Officer, retiring in 1986. Upon moving to Cape May in 1985, Ed continued his love of fishing and boating while Captaining his own Charter Boat, the Miss Allison, and later sportfishing with his friends aboard the Raging Bull. Ed was active within the Cape May community and held various memberships including the Cape May Marlin and Tuna Club; Cape May VFW Peterson-Little Post 386; the Villas Fishing Club and the Moose Lodge #1054, Cape May, and numerous other fishing organizations. He was predeceased by his brother, Tom Robinson and his daughter-in-law, Christine Robinson. Ed will be dearly missed by his loving family which includes his wife of 29 years, Millie (nee Newman) Robinson; two sons, Edward Robinson, Jr. and Kevin Robinson; brothers, Gerald (and Paula), Joseph (and Nora), Richard (and Anna Marie), Michael (and Betsy), Gary and James (and Lorraine); one sister, Marianne; four grandchildren, Amanda, Deanna, Eddie, III and Melanie; sister-in-law, Mary Ann Robinson. Relatives and friends will be received on Monday (July 28th) from 6PM – 8PM in the Spilker Funeral Home, 815 Washington St., Cape May and again on Tuesday IN CHURCH (July 29th) from 12:30PM – 1:20PM in Our Lady Star of the Sea Church, 525 Washington St., Cape May where Mass of Christian Burial will follow and begin at 1:30PM. Interment will follow with Military Honors in the Cape May County Veterans Cemetery. In lieu of flowers, memorial contributions are suggested to: Animal Outreach of CMC, 600 Park Blvd., West Cape May, NJ 08204.

ROBINSON, Edward F. &#8211; 72, of Cape May and Jupiter, FL passed away suddenly on Monday, July 21, 2014 while in Jupiter. Ed graduated from Northeast Catholic H.S., Class of 1959. He was a United States Marine Corps Veteran. Thereafter,... View Obituary & Service Information

The family of Edward Francis Robinson created this Life Tributes page to make it easy to share your memories.

Send flowers to the Robinson family.