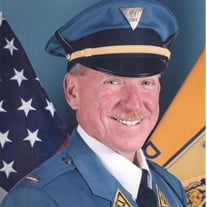 MANZI, Edward J. – 71, NJSP Lieutenant, Retired - of Cape May passed away on Monday evening, October 19, 2015 with his family at his side. A man of honor, Ed served in the United States Air Force in Vietnam. He enjoyed a 30 year career in law enforcement with the New Jersey State Police and rose through the ranks retiring in 1998 as a Lieutenant with the Intelligence Division. Ed enjoyed many things during his life, especially fishing, biking, his morning workouts and going to “The VFW” to hang out with friends. Ed was a diehard Philadelphia Eagles and Phillies fan and cherished his time with his family including his two golden retrievers Paddy & Katie. He loved vacationing with his family and dogs in the Outer Banks, NC. Ed especially enjoyed his time with his grandsons. He also enjoyed visiting Marco Island in Florida during the winter months and attending the annual State Police Picnic and catching up with all his friends. He is predeceased by his father, Edward Manzi and his mothers, Ruth Manzi and Lucy Manzi. Ed is dearly missed by his loving family which includes his wife of 33 years, Debbie (nee Ward); children, Stacey (and Jim) Abruzzo, Stephanie Stewart and Gary (and Susan) Manzi; brother, John (and Sharon) Manzi; sister, Laura (and Glenn) Volpe; 7 grandsons, Jimmy, Zachary, Anthony, A.J., Michael, Gary and Gage; and 9 nieces and nephews. A viewing will be held from 10am-12pm on Saturday (Oct. 24th) at the Spilker Funeral Home, 815 Washington St., Cape May followed by a funeral service at 12pm. Interment with Military Honors will follow in the Cape May County Veterans Cemetery. In lieu of flowers, memorial contributions are suggested to: The Brendan Borek High Tides Fund (supporting families fighting pediatric cancer), PO Box 41, Avalon, NJ 08202-0041 or online at www.brendansfund.org. Information and condolences can be found at: spilkerfuneralhome.com - Although this website offers many options to send flowers, PLEASE observe the request of the family to send a contribution in Ed's memory to the above named organization instead. It will be greatly appreciated.

MANZI, Edward J. &#8211; 71, NJSP Lieutenant, Retired - of Cape May passed away on Monday evening, October 19, 2015 with his family at his side. A man of honor, Ed served in the United States Air Force in Vietnam. He enjoyed a 30 year career... View Obituary & Service Information

The family of Ed Manzi created this Life Tributes page to make it easy to share your memories.

Send flowers to the Manzi family.